Inside Kajol's Fam-Jam With Mom Tanuja And Sister Tanishaa

"When the clan is gathered, the house is blessed," wrote Kajol 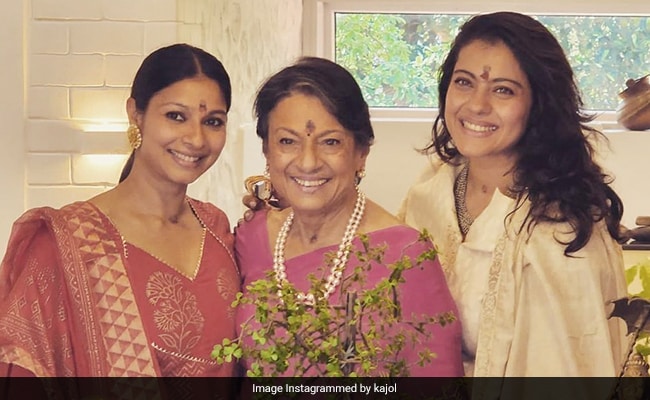 Kajol shared some picture-perfect moments from her get-together with mom Tanuja, sister Tanishaa Mukerji and a few other family members on her Instagram profile on Monday. Our favourite picture is the one in which Kajol can be seen posing with Tanuja and Tanishaa as she smiles with all her heart. The trio can be seen dressed in their festive best. "When the clan is gathered, the house is blessed," Kajol captioned the post. She added the hashtags #withtheoriginals, #lettherebelight and #loveallaround to her post. In the comments section of Kajol's post, Tanishaa dropped heart emojis.

Kajol loves to delight her Instafam with pictures from her fam-jam sessions. On Diwali, Kajol shared a picture with husband Ajay Devgn, daughter Nysa and son Yug and she wrote: "Family says it all."

Here is a post from Kajol's Durga Puja festivities with family this year.

In terms of work, Kajol was last seen in the Netflix film Tribhanga, which marked her digital debut. Produced by Ajay Devgn, Tribhanga was directed by Renuka Sahane and it also starred Tanvi Azmi and Mithila Palkar. She will next be seen be seen in Revathy's Salaam Venky.

Tanishaa Mukerji stepped into Bollywood with the 2003 film Sssshhh.... She later starred in films such as Popcorn Khao! Mast Ho Jao, Tango Charlie and Neal 'N' Nikki among others. She also participated in reality TV shows such as Bigg Boss 7 and Fear Factor: Khatron Ke Khiladi 7.