Diwali 2022: Kajol Had This Much Fun With Madhuri Dixit At Manish Malhotra's Party 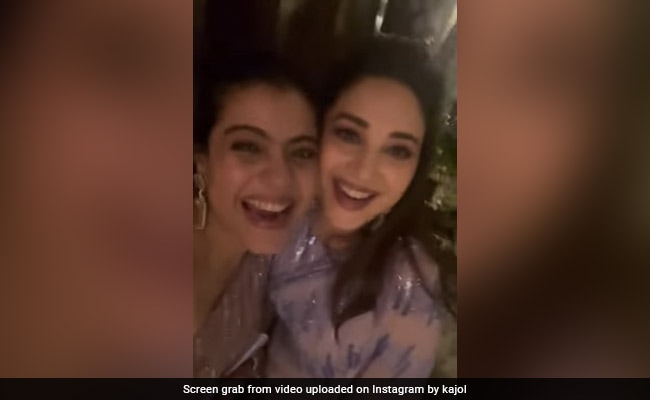 What's a Diwali party without some music, dance and a whole lot of fun? Going by Kajol's latest Instagram post, it wouldn't be wrong to say that none of it was missing at Manish Malhotra's Diwali bash. The who's who of Bollywood, including Aishwarya Rai Bachchan, Katrina Kaif, Madhuri Dixit, Kajol, Shilpa Shetty, Karisma Kapoor, and Kiara Advani added fun, glamour and stardust to the celebrated fashion designer's party. Giving a glimpse of the fun party, Kajol shared a video on Friday. She is seen vibing to Abba's song Dancing Queen with the “original Dancing Queen” Madhuri Dixit. The duo look jovial singing and enjoying the track at the party. “With the original Dancing Queen! Madhuri Dixit, thank you for making me have so much fun on the floor,” wrote Kajol. She also shared a heartwarming note for host Manish Malhotra. It read: “Manish Malhotra, thank you for making that happen. Wishing everyone a pre-Diwali celebration time!”

Madhuri Dixit was quick to react to Kajol's post. Calling her “stupendous,” she wrote, “The pleasure was all mine [heart icon]. You are stupendous [fire icon]. Happy Diwali guys!”

Saba Pataudi also dropped a comment where she was all praise for Madhuri Dixit and Kajol's fun clip. “Love,” she wrote and added: “The insane moment only you can make happen. Happy pre-Diwali. Hugs.”

Just like every year, Manish Malhotra hosted a grand Diwali party at his house in Mumbai. Bollywood's creme de la creme were spotted at the bash, making it a night to remember. Aishwarya Rai Bachchan, who is basking in the success of Ponniyin Selvan – I, arrived at the party with her husband, actor Abhishek Bachchan. She was looking magnificent in a baby pink traditional outfit while Abhishek opted for a red kurta set. Katrina Kaif and Vicky Kaushal made a grand entry in pastel green and black attire. Kiara Advani and Sara Ali Khan's go-to colour for the occasion was gold.

The Kapoor sisters – Janhvi and Khushi - added a splash of green and cream colours to the party. Suhana Khan, who will make her Bollywood debut with Zoya Akhtar's The Archies, was BFF Ananya Panday's plus-one at the party. See who else attended Manish Malhotra's party here.