Inside Isha Ambani's Wedding: Shilpa Shetty, Gauri Khan, Sunita Kapoor And The 'One And Only' Rekha 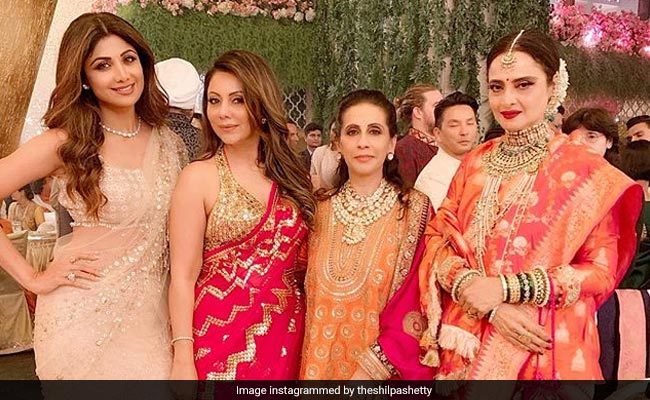 On Thursday, Shilpa Shetty treated her Instafam to inside pictures from Isha Ambani and Anand Piramal's wedding, which took place at the Ambani residence in Mumbai. Shilpa Shetty posted two pictures from the wedding on her Instagram timeline featuring herself with actress Rekha, Gauri Khan and Sunita Kapoor. "The posers and what a colourful fun night it was with Gauri Khan, Sunita Kapoor and the one and only Rekha. Hearty congratulations to the Ambani and Piramal families. It was so beautifully done," Shilpa Shetty captioned the pictures. For the wedding, Shilpa wore an embellished saree from the collections of Tarun Tahiliani. Gauri Khan opted for a red and golden saree while Sunita Kapoor was dressed in a long kalidar suit. Rekha looked ravishing in an orange and pink saree. She completed her look with a neat hairdo and gajra.

The #posers... and what a colourful fun night it was @gaurikhan @kapoor.sunita and the one and only #Rekha. . Hearty congratulations to the #ambani and #piramal family , it was so beautifully done #ishaambaniwedding #ishaanandwedding #celebrations #friends #love #wedding #memories #aboutlastnight #instagood

Nita and Mukesh Ambani's daughter Isha's wedding was a star studded affair. The wedding, which took place on Wednesday, was attended by Bollywood celebrities, politicians and industrialists. The Bachchans, Aamir Khan and his wife Kiran Rao, Salman Khan, Shah Rukh Khan, Hrithik Roshan, Ranveer Singh and Deepika Padukone, Priyanka Chopra and Nick Jonas, Shahid Kapoor and wife Mira Rajput, Kareena Kapoor and Saif Ali Khan were some of the celebrities who had attended the wedding.

Photos from the big fat Indian wedding of Isha Ambani and Anand Piramal were also shared by Amitabh Bachchan on social media. Big B shared a set of family photographs from the wedding. "Family togetherness is the bond that defies all else. Not that there ever is an else but if there were, it would never stand the test of a family standing together," Amitabh Bachchan wrote.

Off to the wedding .. and all are aware which one ..

Shweta Bachchan Nanda shared a photo of herself with parents Amitabh and Jaya Bachchan and daughter Navya Naveli on her Instagram timeline. "Mine," Shweta captioned the picture. The photo was taken before the Bachchans left for the wedding.

Actor Anil Kapoor, who also attended the Ambani wedding with wife Sunita and daughter Sonam, shared a picture on his Instagram timeline. "With my two beautiful ladies by my side," Anil Kapoor captioned the photo.

With my two beautiful ladies by my side! #aboutlastnight #iamjusttryingtokeepup

The Ambani and Piramal families hosted the pre-wedding functions of Isha and Anand in Udaipur over the weekend.