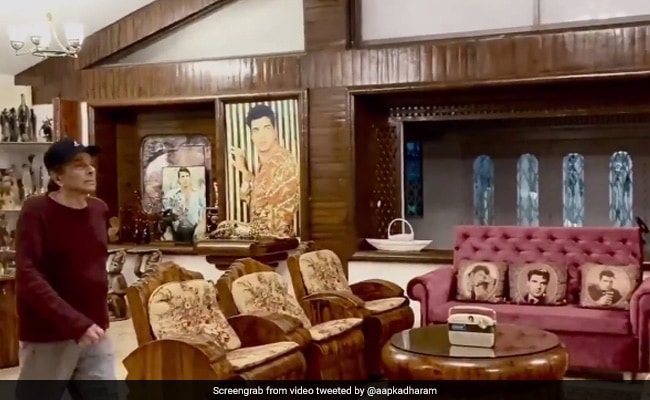 Dharmendra in a still from the video he shared. (Image courtesy: aapkadharam )

Veteran actor Dharmendra, who is currently living in his Lonavala farmhouse (going by to his recent Instagram posts), gave a sneak peek into his lavish house on Friday. The actor, 84, also surprised his fans by announcing that he is prepping for a new film. Sharing glimpses of his house in a video, Dharmendra revealed that due to the rain, he enjoyed a brisk walk indoors while listening to Lata Mangeshkar's song Ni Baliye Rut Hai Bahar Ki. "Baarish mein...indoor brisk walk for half an hour.... listened to Lata ji's old song... remember my college days... God willing," he wrote in the caption. In the clip, Dharmendra can be seen taking a walk in the hallway before he stops to leave a message for his fans.

Sharing an update about his upcoming project, Dharmendra, in his post, also wrote: "Getting ready for a new movie... need your good wishes. Love you all."

Here is the video that will give you a tour of Dharmendra's farmhouse:

Baarish mein...indoor brisk walk for half an hour.... listen Lata ji,s old song ... remember my college days... God willing ..getting ready for a new movie.... need your good wishes. Love you all. pic.twitter.com/8IJsjhq4GL

Meanwhile, also check out some other pictures and videos from the actor's Lonavala farmhouse:

Dharmendra was last seen in his wife Hema Malini's film Shimla Mirchi. The actor made a guest appearance in the film, which released earlier this year.

Dharmendra has starred in hits like Sholay, Phool Aur Patthar, Kaajal, Dharm Aur Qanoon, Bhagawat and Charas. His son Sunny Deol is best-known for his performances in Gadar: Ek Prem Katha and Ghayal. Bobby Deol, Dharmendra's other son, has featured in films like Badal, Barsaat, Ajnabee, Soldier, Apne and Tango Charlie, to name a few.

Sunny and Bobby Deol are Dharmendra's sons with his first wife Parkash Kaur. The veteran actor has also daughters Esha and Ahana Deol with Hema Malini, whom he married in 1979.