Sharing a video from his farmhouse, Dharmendra wrote about his morning ritual 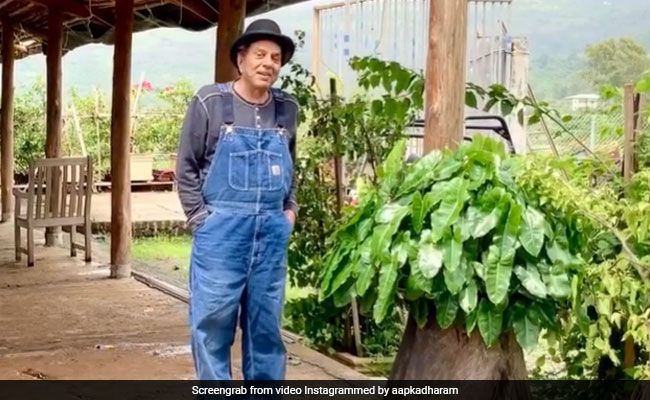 Dharmendra in a still from the video he shared. (Image courtesy: aapkadharam )

For veteran actor Dharmendra, every morning is a breathtaking spectacle in his Lonavala farmhouse. The 85-year-old actor has been living in Lonavala, Maharashtra for quite some time now. He shares glimpses of his farmhouse with his fans on social media every now and then. On Wednesday, Dharmendra posted a wonderful video from his residence showing his fans the spectacular view he watches every morning at the farmhouse, covered with greenery and bougainvillea. Sharing the video, Dharmendra wrote about his morning ritual. "Good morning, friends. Almond oil massage is good in the morning," he wrote. Check out the stunning view from Dharmendra's Lonavala farmhouse here:

Also, take a look at the sunset from Dharmendra's farmhouse:

In one of his previous posts, Dharmendra also gave a tour of his farmhouse.

Baarish mein...indoor brisk walk for half an hour.... listen Lata ji,s old song ... remember my college days... God willing ...getting ready for a new movie.... need your good wishes. Love you all. pic.twitter.com/8IJsjhq4GL

Meanwhile, check out some more clips from Dharmendra's farmhouse here:

Dharmendra married actress Hema Malini in 1979 and the couple are parents to two daughters - Esha and Ahana Deol. At that time, Dharmendra was already married to Prakash Kaur, with whom he has four children - actors Sunny and Bobby Deol, as well as two daughters Vijayta and Ajeeta. When the veteran actor married Hema Malini, he didn't divorce Prakash Kaur.

Dharmendra is known for his performances in hits like Sholay, Phool Aur Patthar, Kaajal, Dharm Aur Qanoon, Bhagawat and Charas. He was last seen in the 2018 film Yamla Pagla Deewana: Phir Se, which also starred his sons Sunny and Bobby Deol. His next film is Apne 2.