Inside Britney Spears And Sam Asghari's New Home. See Pics From The Pool

"Got married and moved into a new house around the same time," wrote Britney Spears 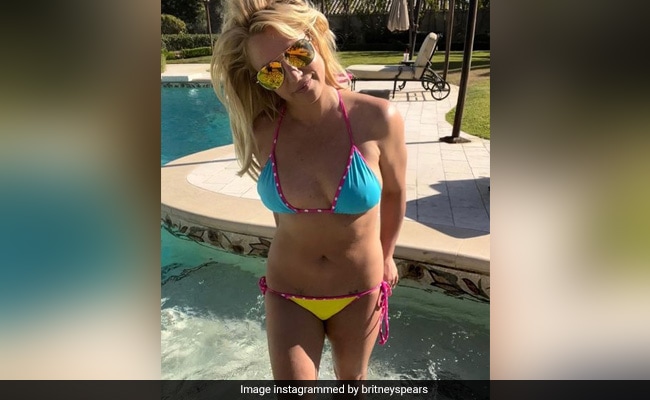 Britney Spears and husband Sam Asghari did not go on a honeymoon but they did move into a new house, pictures from which the pop star shared on her Instagram profile. The pictures have glimpses of her new house, especially the pool. Britney captioned the post: "Haven't been on my honeymoon yet... Got married and moved into a new house around the same time ... Not the smartest thing to do... Oh well it's coming together. It's so weird I wake up and everything is new... New pool, new kitchen, new bed ... I think I'm in shock." The 40-year-old star added, "Figuring out a couple of things. I definitely like being outside but I also like being inside too... My yard is sick so my dogs are in pig heaven."

"Change is so great," wrote Britney Spears, adding, "As my kids say that's fetch. Since I'm so uncool... Yes I will keep sharing. It keeps me on track. My family has always had a way of letting me know ... Well I guess I have a pretty good way as well. I took a nice dip in my pool. It's so bright and it has a nice chill spot and a slide. I went down it 4 times already. It's hella fast. I cut all my hair short and my husband just made me a steak...Life is good."

Britney Spears married Sam Asghari in an intimate albeit dreamy ceremony earlier this month. She shared multiple posts from her wedding and captioned one of them: "Fairytales are real."

Sam Asghari and Britney Spears met in 2016 when they co-starred in a music video for her single Slumber Party. After announcing their engagement last year, Britney Spears frequently shared pictures with Sam on her Instagram profile. The couple said last month that the surprise pregnancy they had announced only weeks before had ended in a miscarriage.