Inside Jim Parsons' wedding: One of the pictures features Jim Parsons and Todd Spiewak walking on to the dance floor, hand-in-hand, for their first dance 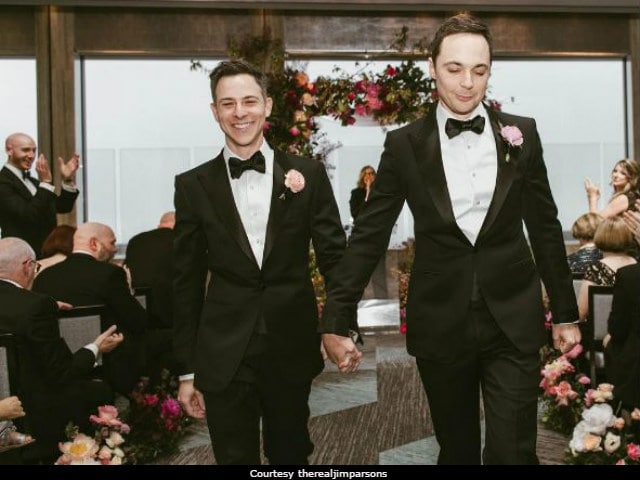 New Delhi: Fans of The Big Bang Theory's Sheldon Cooper aka Jim Parsons are currently busy admiring photographs from inside the close-knit wedding ceremony of the 44-year-old actor and his long-time boyfriend Todd Spiewak. The wedding photos shared by Jim Parsons on Instagram are accompanied by captions which are in typically Sheldon Cooper-style. One of the pictures features Jim Parsons and Todd Spiewak walking on to the dance floor, hand-in-hand, for their first dance. Suited in Tom Ford tuxedos, the duo made for some stunning photographs at the reception party. Jim Parsons and graphic designer Todd Spiewak have reportedly been dating for 15 years now. The duo married in an intimate ceremony in New York's Rainbow Room on May 13.

Ahead of the reception, Jim Parsons and Todd Spiewak were colour coordinated in black for the wedding ceremony, which was supervised by their best-friend Melissa McNeeley, who was also the one who officiated the wedding. In the wedding photos, which also feature Melissa, the The Big Bang Theory actor and Todd Spiewak can be seen having a lot of fun during the ring-exchange ceremony.

She's our best friend, she was our wedding planner, she was our officiant and she played all three parts brilliantly this past Saturday: thank you and love you, @melissamcneeley (that Chuppah ain't bad, either, @doan_ly !) photo cred @ambergressphotography

Reception, first dance... (have to say thank you to #anniepsaltiras who was supposed to just be a guest but worked really hard to help us get the @tomford tuxes we loved so much AND she tied the bow ties of several guests that night. Annie is a champ and we love her ) photos by @ambergressphotography (why can't I figure out how to tag @melissamcneeley and @doan_ly ??? Oh yeah, cuz I'm old.)

Promoted
Listen to the latest songs, only on JioSaavn.com
In 2012, Jim Parsons came out as gay in a profile published by the The New York Times, which described him as "gay and in a 10-year relationship." In 2016, of his relationship with Todd, Jim Parsons wrote on Instagram: "I met this guy (the one with the mic) 14 years ago today and it was the best thing that ever happened to me, no contest. One of his greatest gifts to me is that he no longer takes me to sing karaoke."

Jim Parsons has also been part of shows like Family Guy (as Sheldon Cooper), Who Do You Think You Are? and made an appearance on Saturday Night Live. Meanwhile, The Big Bang Theory wrapped its ninth season with a bang and is reported to end after another season.