Inside Anshula's Birthday Celebrations With Janhvi, Khushi And Arjun Kapoor

Here's how Arjun, Janhvi and Khushi made Anshula's birthday special 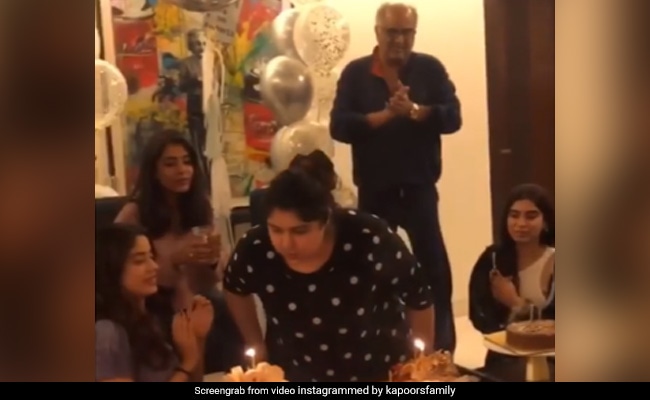 Janhvi, Anshula and Khushi in a still from the video. (Image courtesy: kapoorsfamily )

Anshula Kapoor turned 27-years-old on Sunday and she celebrated her birthday along with her family. Videos from Anshula's birthday celebrations have been curated by several fan clubs on Instagram and are trending big time. In the video, we also got a glimpse of Anshula's father Boney Kapoor, her brother Arjun Kapoor, sisters Janhvi and Khushi and her cousin Shanaya Kapoor cheering for her as she cuts the birthday cake (or should we say cakes). Janhvi Kapoor also shared snippets from the fam-jam on her Instagram stories.

Check out the videos from the celebrations here:

Here are some more videos from Anshula Kapoor's birthday party:

Janhvi Kapoor, who made her Bollywood debut with the 2018 film Dhadak, has several projects in the pipeline, which include Gunjan Saxena: The Kargil Girl, RoohiAfza with Rajkummar Rao and Ghost Stories. She will also be seen Karan Johar's period drama Takht and Dostana 2.

On the work front, Arjun Kapoor was last seen in the period drama Panipat, co-starring Kriti Sanon and Sanjay Dutt. The actor will next be seen in Sandeep Aur Pinky Faraar, opposite Parineeti Chopra.

Khushi Kapoor, who flew off to New York in September this year for higher studies, returned to Mumbai this month for her Christmas holidays.