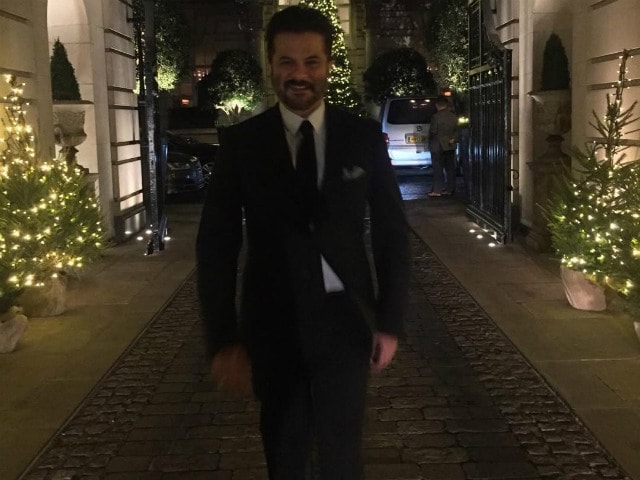 New Delhi: Actor Anil Kapoor, Bollywood's jhakaas star, blows 60 candles out on Friday - the Ram Lakhan actor turned a year older on December 24 ( but we're not sure if we believe that.) Anil Kapoor and family are currently in London - whether only to celebrate his 60th birthday or not - is not known but pictures from his birthday party have already been shared on social media. Anil Kapoor's daughter, actress Sonam and son, Bollywood newcomer Harshvardhan, also posted heart-warming messages on Instagram on Friday. "My father gave me the greatest gift anyone could give another person, he believed in me," wrote Sonam. One-film-old Harshvardhan wrote: "Father, husband, actor and more. You make it look so simple." Birthday wishes from both the younger Kapoors were accompanied by old, worn out pictures.

Anil Kapoor let us in inside his birthday celebrations in London:

To life and almighty for being so kind and generous ...great full , blessed ...

On the way to annabels !

Meanwhile, Sonam Kapoor, 31, wished her father and said: "I hope I make you proud every day," when she shared a throwback moment with Anil. In the picture, baby Sonam is lodged into her father's arms and wears a bewildered expression on her face while Anil Kapoor smiles ear-to-ear.

My father gave me the greatest gift anyone could give another person, he believed in me. - Jim Valvano Happy happy birthday daddy! I'm so proud to be your daughter.. I hope I make you proud everyday.. love you lots! @anilskapoor

Anil Kapoor have always shared his review of Sonam and Harshvardhan as actors and even helped Harshvardhan promote Mirzya. Harshvardhan made his debut in acting with Rakeysh Omprakash Mehra's Mirzya, which releases earlier this year. In September, Anil Kapoor broke down while introducing Harshvardhan at an event in aid of Mirzya, reported IANS. Speaking about Harshvardhan, he said: "I know people are very happy that a star's kid is here but I want to say that whatever he has done, he has done on his own. He is gifted but don't expect anything like me from him and that's what his strength is. Rakeysh Omprakash Mehra spotted him and groomed him and his entire team has made him Mirzya today."

Sonam Kapoor's performance in Neerja, the acclaimed biopic on slain Pan Am chief purser Neerja Bhanot, was also hailed by Anil Kapoor. In an interview with IANS, he decoded Sonam Kapoor as a "star" and said: "By seeing her on the big screen or photographs, she may look like a star. She is, but she is also like every other daughter and girl. Anyone can be Sonam Kapoor."

Promoted
Listen to the latest songs, only on JioSaavn.com
Anil Kapoor is the star of 2015 films Dil Dhadakne Do and Welcome Back, both of which fared well at the box office. Anil Kapoor made his presence felt on the small screen in 24 season 2. Anil Kapoor is currently filming Mubarakan, co-starring his nephew Arjun Kapoor and actresses Ileana D'Cruz and Athiya Shetty.

Anil Kapoor, a very happy birthday to you!