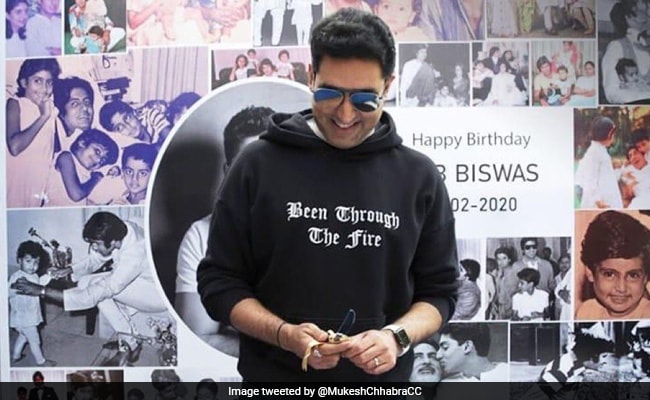 Nomoshkar from the sets of #BobBiswas! To a special birthday celebration for a very special person! Happy Birthday @juniorbachchan#bestwishes#TeamMCCC@CastingChhabrapic.twitter.com/Gh6Xet8X8f

Earlier this month, the Guru actor announced on social media that he's begun shooting for the movie in Kolkata. Abhishek Bachchan wrote: "Nomoshka." For the uninitiated, Nomoshkar, ek minute" was a popular greeting style that Bob Biswas used in the film Kahaani, before attacking his targets.

Abhishek announced his association with the project last year. He shared a picture with Shah Rukh Khan, whose production house Red Chillies Entertainment is producing the film. "Excited to announce my next film! Bob Biswas. Can't wait to get started. Working with many favourites," he tweeted.

Abhishek Bachchan was last seen in the 2018 film Manmarziyaan, co-starring Vicky Kaushal and Taapsee Pannu. The actor has a busy line-up of films, which includes The Big Bull, Ludo and Gulab Jamun, co-starring his wife Aishwarya Rai Bachchan. The film will be produced by Anurag Kashyap.