Indian Idol 12: Rekha Brightened Up The Musical Night Like This 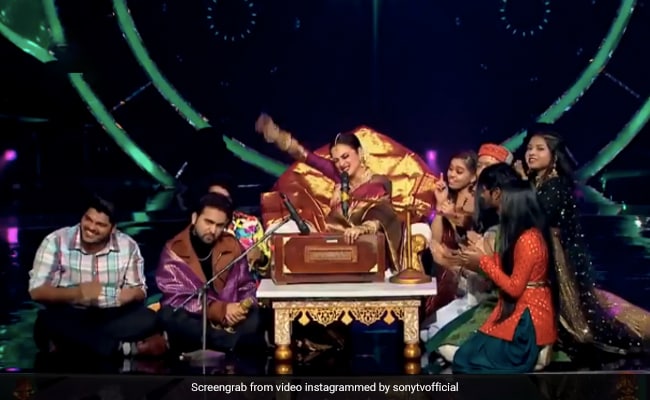 Rekha on the sets of Indian Idol 12. (courtesy: sonytvofficial)

The sets of the singing reality show Indian Idol 12 got all the more khubsoorat courtesy Rekha. The veteran actress was the latest star to visit the show as a guest. A promo video shared by the official account of Sony Entertainment Television, on which the show airs, showcases the actress enjoying the musical night, praising the contestants and reliving old memories by listening to some of her iconic tracks. The caption on the promo video shared by the channel read, "Sensational Rekha ji aur Idol Danish ke saath Mallikae-Ishq Rekha ki shaam banegi behadd khoobsurat." The episode will air over the weekend.

Meanwhile, Vishal Dadlani, who features as one of the judges on the show alongside Neha Kakkar and Himesh Reshammiya, shared pictures with the actress and he wrote about his fan boy moment. "Surreal day! Swipe! The legendary Rekha ji pulled off a sneak-attack and surprised me with a gentle tabla-roll on my head. Chance mila toh...Of course I'mma dance with the most expressive dancer ever.She also called me Vishu-ji all day! That deep voice, though...uff," he wrote.

Rekha is best-known for her performances in films such as Umrao Jaan (1981), for which she even won the National Film Award for Best Actress, Khubsoorat (1980), Ghar, Judaai, Mujhe Insaaf Chahiye, Khoon Bhari Maang, Khiladiyon Ka Khiladi and Silsila, in which she co-starred with Amitabh Bachchan and Jaya Bachchan. She was last seen in R Balki-directed Shamitabh, which released in 2015. The actress also featured in a special medley song in the 2018 film Yamla Pagla Deewana: Phir Se.