Independence Day 2020: Vicky Kaushal Playing Ae Watan On Veena Gets A Whole Lot Of Love On The Internet

Vicky Kaushal, dressed in white kurta and pants, will make you fall in love with his instrumental rendition of the song Ae Watan Vicky Kaushal in a still from his video (courtesy vickykaushal09)

Vicky Kaushal, who co-starred in Meghna Gulzar's critically acclaimed film Raazi, shared a delightful video of him playing the song Ae Watan from the movie on veena as his Independence Day post. Vicky, who captioned the video with the patriotic song's lyrics, also paid a tribute to his teacher Radhika Veena Sadhika in his post. Vicky, dressed in white kurta and pants, will make you fall in love with his instrumental rendition of the song Ae Watan. In the movie Raazi, the song was picturised on actress Alia Bhatt, who was cast as an Indian spy in the espionage drama. Vicky was cast as her husband.

Needless to say that Vicky Kaushal, in this never-seen-before persona, earned a whole lot of love from his Instafam. Anurag Kashyap, who directed Vicky Kaushal in Manmarziyaan, commented: "Kya baat hai, Vicky." Vicky also got a shout-out from celebrated singer Shankar Mahadevan, who wrote: "That's so lovely Vicky! My first instrument was Veena! Great hearing you play this song! Loads of love." Vicky Kaushal responded with this comment: "Thank you, sir." Meanwhile, the Internet can't believe just how talented Vicky Kaushal is. 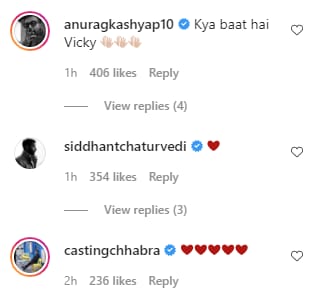 On Independence Day, Vicky Kaushal also wished his fans with this post.

Vicky Kaushal's upcoming films include a biopic of India's first Field Marshal Sam Manekshaw, to be directed by Meghna Gulzar. Vicky Kaushal also played the role of an Army officer in Uri: The Surgical Strike, for which he won the Best Actor National Award.