In Which Sonam Kapoor, Arjun And Cousins Steal Our Hearts Away In Just One Pic

"I am certain I did share that rusk with him which he was staring at," wrote Arjun Kapoor 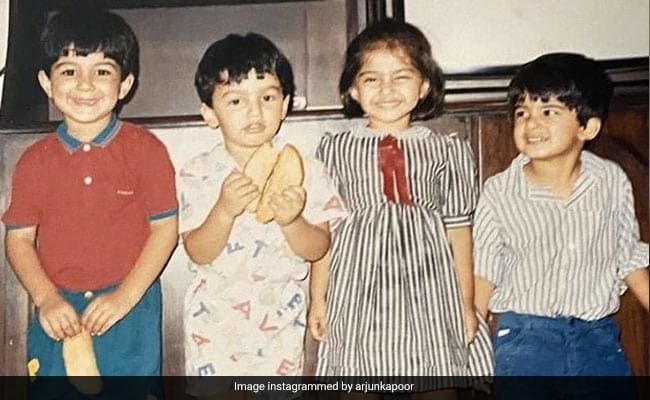 Adorable can't even begin to describe Arjun Kapoor's latest Instagram entry. The actor handpicked a super cute picture of himself with his cousins and posted it on social media. The occasion? It is Arjun Kapoor's cousin Akshay Marwah's birthday. Arjun posted a throwback gold featuring Sonam Kapoor, Mohit Marwah and Akshay Marwah. He captioned it: "Happy birthday Akshay Marwah! Time flies but the bond remains stronger than ever... Also important to note that I am certain I did share that rusk with him which he was staring at."

The Kapoor cousins frequently make appearances on each other's Instagram profiles. Arjun posted this picture and wrote: "Happy birthday to the most good looking man who always holds centre court and fort whether it's a picture, a party or a personal moment... Mohit Marwah may this one be your best yet."

Arjun and Anshula Kapoor are film producer Boney Kapoor's children with his first wife Mona Shourie, who died in 2012. Janhvi and Khushi are Boney Kapoor's children with his second wife Sridevi, who died in February 2018. Anshula Kapoor started an online fundraising platform called Fankind in 2019. Arjun and Janhvi Kapoor are both Bollywood actors, while Khushi studies in New York. She wishes to pursue acting too. Sonam Kapoor is the daughter of veteran actor Anil Kapoor and jewelry designer Sunita Kapoor.