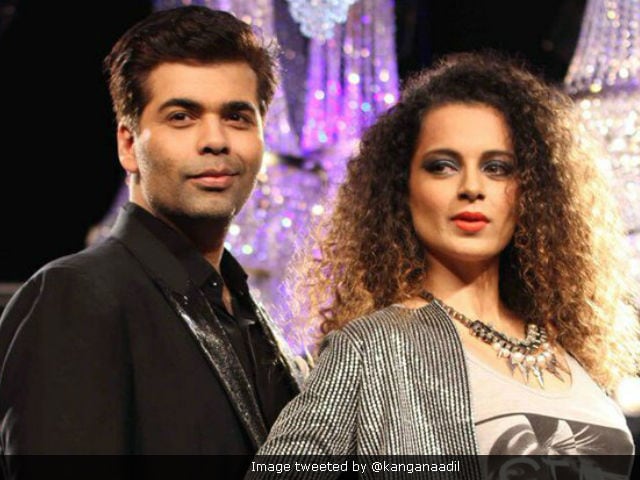 New Delhi: Karan Johar vs Kangana Ranaut is officially one of the most debated topics on the Internet these days. After Karan Johar said he's "done with Kangana playing the woman and victim card" and suggested she should "leave the industry" if she can't handle it, Twitter is divided into two teams - one supporting Kangana and the other supporting Karan Johar. Many applauded Kangana Ranaut when, on Karan Johar's show Koffee With Karan, she said accused him of being the "flagbearer of nepotism" and compared him to "Bollywood mafia." She said, "Karan, you must play the villain in my biopic, if it's ever made." She also reminded him of when he had mocked her English on the Koffee couch. Days after this episode aired, Karan Johar was interviewed by film critic Anupama Chopra at a pre-event for the LSE-SU India Forum, where he said he was "done with Kangana playing the woman and victim card" and that he had provided her a platform to speak.

A day after Karan Johar's interview went viral, Twitter opinion is equally fissured. divided. Many were offended by Karan's disparaging of the 'woman card' and his advice that she should quit Bollywood. Others said that "being 'opinionated' and 'outspoken' is not Kangana's exclusive right." Here what Twitter has to say about Karan Johar vs Kangana Ranaut.

Frankly nothing wrong in what Karan Johar said about Kangana!With due respect to her coming up the hard way she's made playing victim an art

Being"opinionated"&"outspoken" s NOT ExclusiveRight given 2 Kangana others can exercise it too.She n her supporters should gt used to it now

Sorry, Karan Johar, Kangana is where she is not because of you. She's there despite you &your cosy circle. She can say whatever she wants.

#StarGoldSelectHD@karanjohar on #kangna calling him a 'Flag-bearer of nepotism' Well said! @KaranJoharTeampic.twitter.com/ThNIQtKk6h

Promoted
Listen to the latest songs, only on JioSaavn.com
Kangana Ranaut starred in the recently released Rangoon and will next be seen in Simran.

Tell us what you think about Karan Johar's remarks about Kangana Ranaut in the comments section below.