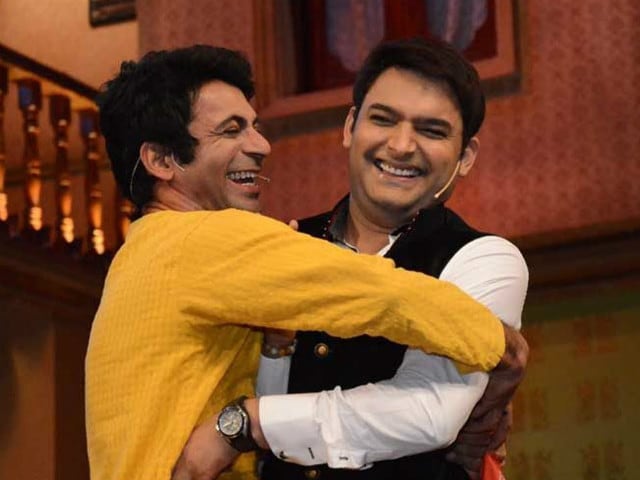 New Delhi: In the spat between comedians and colleagues Kapil Sharma and Sunil Grover that is now playing out on social media, Twitter knows whose side it is on. After Mr Sharma allegedly assaulted Mr Grover on a flight from Melbourne, the mise en scene has shifted online - Mr Sharma wrote a Facebook passing the alleged assault off as a 'family matter'; Mr Grover tweeted advising him not to 'act like God'; Mr Sharma tweeted an apology - and it continues. Twitter, en masse, has ranged itself against Kapil Sharma and suggests that he and Sunil Grover swap roles on The Kapil Sharma Show - which Mr Sharma hosts and on which Mr Grover plays the characters Dr Mashoor Gulati and Rinku Bhabhi. Rename the show, demanded Twitter, and cast Kapil Sharma as the supporting act. "More power to you Sunil. It's time for The Sunil Grover Show," read a tweet while another said: "I think the name should be 'The Sunil Grover Show'." Another tweet posed a challenge for Mr Sharma: "Host The Sunil Grover Show and make Kapil Sharma as the Gutthi of the show. Let's see if Kapil has it in him." Gutthi is the character Mr Grover played on the previous show Comedy Nights With Kapil, which he later quit citing payment issues.

Kapil Sharma make ppl happy but Sunil Grover make ppl laugh.#KapilSharma is nothing without #SunilGrover
So give Respect each other #kapil .

SUNIL GROVER is the backbone of TKSS.Most of the Fb users remind kapil sharma in comnts on his fb post
RTWT IF U AGREE
LIKE IF U DONT AGREE

If Sunil Grover quits The Kapil Sharma show then 90% people will stop watching it. #TKSSpic.twitter.com/wYdVoCieEj

@KapilSharmaK9@WhoSunilGrover if Sunil grover quit they show.... then no bodies like kapil & kapil show ...

It all began when Kapil Sharma, allegedly drunk, turned on Sunil Grover on the flight from Melbourne. Various accounts suggest that Mr Sharma was being abusive to other passengers and Mr Grover attempted to restrain him. After the Facebook post in which he described the alleged fight as a 'family matter,' Mr Sharma tweeted Mr Grover an apology on Monday:

On Tuesday, Sunil Grover shared the text of a post which begins, "Yes, you hurt me deeply":

Promoted
Listen to the latest songs, only on JioSaavn.com
Kapil Sharma had more to say his colleague:

Earlier, it was reported that Sunil Grover was on the verge of exiting The Kapil Sharma Show. A source told mid-day that Mr Sharma allegedly assaulted Mr Grover in a drunken state. "Sunil is numbed by the way Kapil assaulted him during a flight from Melbourne, where they did a stage show. He was merely trying to calm down Kapil, who was drunk and hurling abuses at another team member, Chandan (Prabhakar)," mid-day quoted the source as saying. Mr Grover allegedly did not shoot for the episode of the show that was filmed on Monday.

Nach Baliye 8: Ranbir Kapoor Likely To Make His Television Debut As Host Of The Launch Episode