IIFA Awards: "I dedicate this award to the entire team of MOM," said Boney Kapoor 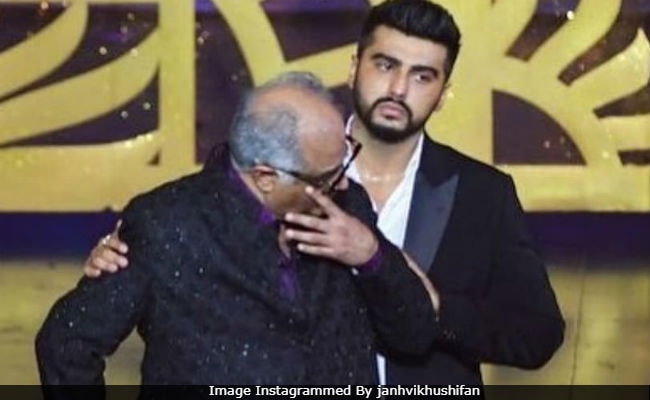 New Delhi: It was an emotional moment for filmmaker Boney Kapoor, who accepted wife Sridevi's Best Actress Award (posthumously) for MOM at the 19th International Indian Film Academy (IIFA) Awards in Bangkok. Megastar Sridevi died in February in Dubai. She was 54. "I dedicate this award to the entire team of MOM," said an emotional Boney Kapoor, after collecting Sridevi's trophy, news agency IANS reported. MOM was Sridevi's 300th film. "I have mixed emotions today. I miss her every minute and second of my life. I still feel she is around here....I want you all to support Janhvi like you supported her mother," Boney Kapoor added. Janhvi is Sridevi and Boney Kapoor's elder daughter and Khushi is the younger one. Janhvi's debut film Dhadak releases next month.

She was the queen of grace and worthy of every praise. There's no doubt the award for Performance in a Leading Role - Female posthumously goes to the late #Sridevi#IIFA2018#NEXAIIFAAwardspic.twitter.com/x88ClJgR1d

Pictures of Arjun, being by his dad's side, have also been shared widely. Arjun is Boney Kapoor's son with first wife Mona. He has a younger sister Anshula.

On being by Boney Kapoor, Janhvi and Khushi's side after Sridevi's death, Arjun had earlier tweeted, "Me and Anshula Kapoor represent our mother every single second we live. She would expect us to have been standing next to our father no matter what and be there for Janhvi and Khushi."

In April, Sridevi was given her first ever National Award for MOM, which was collected by Boney Kapoor, Janhvi and Khushi.

In MOM, Sridevi played the role of a mother, who seeks revenge for her daughter's rape. Her co-star Nawazuddin Siddiqui won the Best Actor In A Supporting Role for MOM. On social media, Nawazuddin said that he dedicates his award to the late actress.

It was once in a lifetime opportunity to work wid d first female superstar @SrideviBKapoor & I dedicate my award as a tribute to her.Living Legend #Rekhaji u stole the show last night, it was an honour to get the award from u.IIFA 2018 had d best atmosphere ever.