IFFI Day 2: Thank You Sridevi For These Stunning Pictures

Sridevi inaugurated the Indian Panorama section of the Goa festival 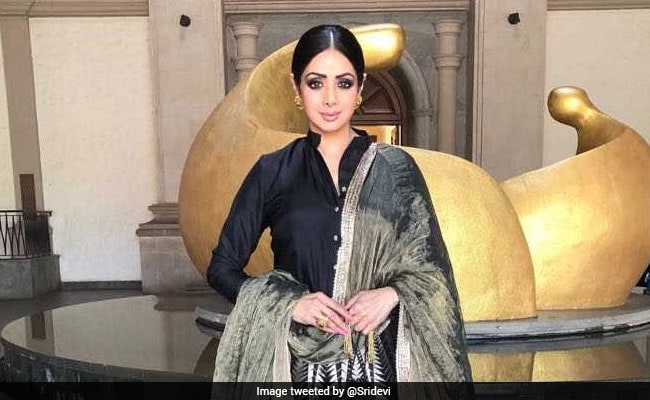 New Delhi: The 48th International Film Festival of India opened with a bang on November 20 in Goa in the presence of Information and Broadcast minister Smriti Irani and Bollywood celebrities such as Sridevi, Shah Rukh Khan and Shahid Kapoor among others. The Chandni actress, who was accompanied by husband Boney Kapoor and daughter Janhvi Kapoor, inaugurated the Indian Panorama section of the Goa fest along with festival director Sunit Tandon. Sridevi looked stunning in a gold and black anarkali ensemble by designer Manish Malhotra. Shah Rukh Khan struck his signature pose at the fest and elated the audience with his scintillating performance while Katrina Kaif, who is awaiting the release of her upcoming film Tiger Zinda Hai, will be a special guest at the closing ceremony of the festival.

Here are the highlights of the International Film Festival of India:

Sridevi, in her brief speech, lauded the hard work of the jury in selecting the movies. "The films have been chosen by the esteemed jury having worked in various industries over the last 50 years. This segment is something I am really excited about. It is my pleasure to declare the Indian Panorama 2017 officially open," Sridevi said.

Actress @SrideviBKapoor at the inauguration of the Indian Panorama section, during 48th International Film Festival of India #IFFI2017, in Panaji, Goa pic.twitter.com/INeAExK5Qb

Shahid Kapoor's brother Ishaan Khattar, who is prepping for his upcoming film Dhadak with Janhvi Kapoor (her debut film), was present with his Beyond The Clouds co-star at the Goa festival.

Here are some other pictures from IFFI 2017:

Thank you @iamsrk for your gracious presence at @IFFIGoa and giving such an elegant opening to #IFFI2017. pic.twitter.com/8G3hjDRbuj

Thankful to @shahidkapoor for sharing his vision on the future of Cinema at #IFFI2017. pic.twitter.com/k5S368vxjE

Hindi feature film Pihu opened the feature category while Pushkar Puran kickstarted the non-feature section. Pihu director Vinod Kapri said, "It's an honour for me to be here and my film to open this section."

Promoted
Listen to the latest songs, only on JioSaavn.com
In Pushkar Puran, Kamal Swaroop returns to Rajasthan, his cinematic home, three decades after his cult film Om Dar-Ba-Dar(1988).