If Alia Bhatt Wins The National Award, She Will Be 'Blown Away' 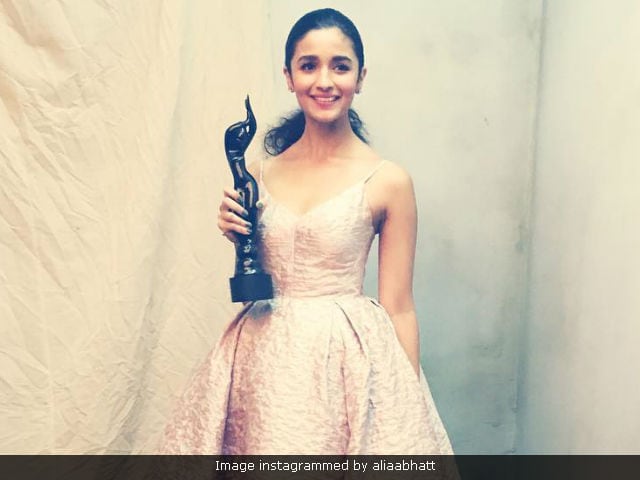 New Delhi: Actress Alia Bhatt, star of upcoming film Badrinath Ki Dulhania, has said that she will be 'blown away' if she wins a National Award (for Udta Punjab, not Badrinath). The 23-year-old actress' performance as a brutalized Bihar migrant in last year's acclaimed drug drama has already won her several top honours this award season, including at the Filmfare and Screen Awards. There is talk that the National Award for Best Actress could be next. "I will be blown away if I get it. It's an honour to win a National Award. I don't know if it's possible, but if it happens, of course, I will be very glad," Alia Bhatt told news agency IANS.

Were she not to win, Alia will be circumspect. "With awards, you are rewarded for just your efforts. I don't think of it as the be-all and end-all. I don't work for awards, but the year that you get them, it's just that you feel very grateful and you feel very glad that your efforts have been recognised. There's nothing else to feel about it. You shouldn't take it too seriously; and if you don't get it, that doesn't mean that your career is over," she told IANS.

It has just been announced that Alia will walk the ramp for designer Namrata Joshipura at the Amazon India Fashion Week, starting March 15 - also the actress' birthday. She will be 24, and her youth has been the subject of much marveling in Bollywood and outside it.

"More than me, I want other people to say whether it is the high point or low point in my career. For me, these are just points that I wanted to achieve... I started at a young age. It's been five years now. But for me, I don't understand what's younger or older. I don't understand age," Alia told IANS, adding that she wants to "work like this even when I am 40 or 50 or 80, if possible." Her short filmography includes highly-praised performances in films like Highway, Dear Zindagi and 2 States.

In Badrinath Ki Dulhania, Alia plays the cool and collected Vaidehi, unimpressed by the unsophisticated advances of Badrinath Bansal, played by actor Varun Dhawan. "Every film that I pick up is a sort of challenge for me. Badrinath Ki Dulhania was challenging because it is (set) in a different place altogether. I am playing a girl from Kota. She is a small-town girl and very different from other characters that I have played. Through such films, you have to make the audience smile and cry at the same time -- that itself is a challenge," Alia Bhatt told IANS.

Promoted
Listen to the latest songs, only on JioSaavn.com
Badrinath Ki Dulhania, directed by Shashank Khaitan and produced by Karan Johar, releases this Friday.