ICYMI: This Celeb Has Been Matching Her Met Gala Outfits With The Carpet All These Years 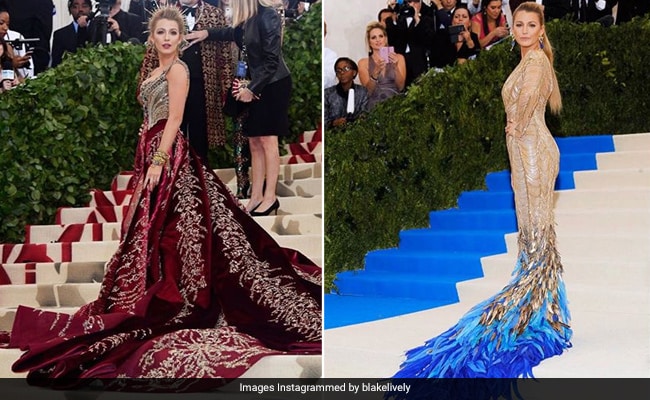 Blake Lively just revealed in an ROFL post that she had her own personalised theme in mind while dressing up for the Met Gala in the past few years. Blake, who didn't attend the fashion gala last year, shared photos of her Met Gala looks from 2018, 2017 and 2016, to write: "When the carpet matches the Blakes. Met Ball 2018, 2017, 2016." In her post, she added photos of three of her Met Gala moments and in each of them, the steps leading up to The Metropolitan Museum of Art, matches her outfit! In 2018, Blake Lively wore a floor-sweeping Versace gown while in 2018 and opted for the same designer for her 2017 Met Gala creation. In 2016, Blake was in a Burberry ensemble. Blake Lively's friend Gigi Hadid, who recently revealed her pregnancy, trolled the 32-year-old actress for her post and wrote: "How far in advance do you have to tell Anna what colour to make the carpet?" The "Anna" here is fashion legend Anna Wintour, Vogue's editor-in-chief and also the Chairwoman of the Met Gala, who hosts the fashion event every year.

The Met Gala is held on the first Monday of May every year since 2005 but this year, the event has been postponed because of the coronavirus pandemic.

Meanwhile, actress Priyanka Chopra is also missing the Met Gala a bit too much. In a post, she revealed that this year, her stylist would have been her tiny niece Krishna, who is an expert at styling the theme: "Pretty Pretty Princess!" Here's what Priyanka posted: "First Monday in May. This year's theme: Pretty Pretty Princess. Glam and creative direction by: Krishna and Divya Jyoti."

While Blake Lively and her usual arm candy - husband Ryan Reynolds - weren't at the Met Ball last year, Priyanka Chopra had a major fashion moment! "Camp" was the theme and Priyanka walked up the stairs with husband Nick Jonas in a thigh-high slit Dior ensemble with a feathered cape. Priyanka added oodles of drama to her look with OTT make-up, afro curls and a crown-like headgear.

Blake Lively and Priyanka Chopra are only making us daydream about what this year's Met Gala could have been!