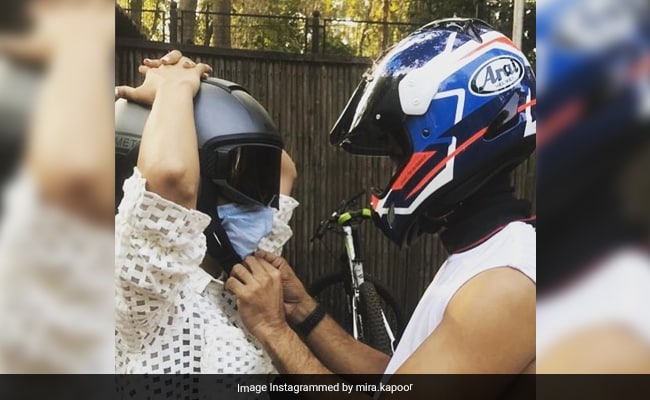 Trust Mira Rajput and Shahid Kapoor to give us some major couple goals. From love-filled social media exchanges to rib-tickling quarantine videos, the couple has taken over Instagram on several occasions and how. As per her latest post, we can see the husband-wife duo twinning in helmets. We know the man fastening Mira's helmet is Shahid as she tagged him. She added a quip to her caption by making a Crime Patrol reference. The mother-of-two tweaked the show's name and wrote: "Corona Patrol." She also twisted the iconic character, from the TV show CID, ACP Pradyuman's name and wrote: "ACP Shadyuman." Well, it doesn't end here as Mira's brother-in-law, actor Ishaan Khatter asked an important question in the comment box. He wrote under the post: "Shady human?" to which Mira replied, "hahahaha BEST." In another reply, Mira tagged Ishaan and wrote: "Crime Patrol bro." Actress Anita Hassanandani reacted by sharing raising hands and laughing loud emojis.

This is not the first time young Ishaan has reacted to sister-in-law Mira's Instagram entries. Ishaan usually doesn't miss an opportunity to comment on her posts. Mira and Ishaan often trend for their adorable social media banters.

A recent video posted by Mira garnered some epic comments from the family. She shared a clip speaking about how millennial moms fail and captioned: "#Kidshappen. Has this happened to any of you or am I the only one?" Ishaan wrote: "Zuzah." Mira's mother-in-law, Neelima Azeem said, "Haha."

Remember the cute gravity challenge Mira and Shahid took. While the couple did it together, we don't know who Ishaan's partner was. He dropped several hearts in the comments and wrote, "I did it too."