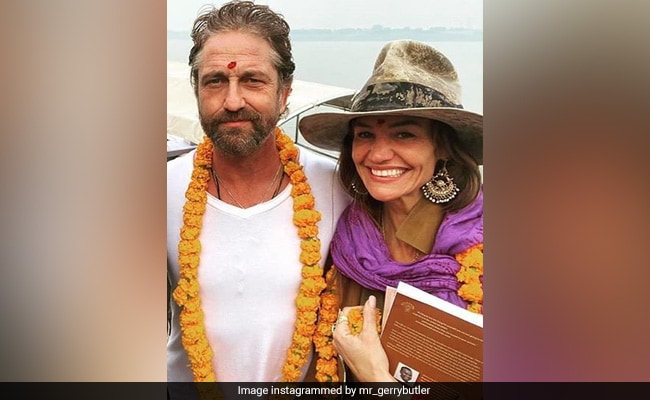 Actor Gerard Butler gave his fans a sneak peek into his Eat Pray Love moments from his vacation in India. The 50-year-old actor, who appears to be holidaying with his rumoured girlfriend Morgan Brown, in the Himalayas now, shared a picture from his India visit on Wednesday. In the postcard-worthy picture, Gerard can be seen facing the sun as he sits with the Himalayas in the backdrop (going by his caption). The Ugly Truth actor captioned his post: "Let your light shine in to the new decade. Sending you all love. Happy New Year from the Himalayas."

Take a look at the picture shared by Gerard Butler here:

Let your light shine in to the new decade. Sending you all love. Happy New Year from the Himalayas.

Meanwhile, industrialist Yash Birla also shared a series of pictures of the actor on his Instagram profile. In the photos, Gerard can be seen posing with his rumoured girlfriend Morgan Brown. In his caption, Yash Birla made a reference to Gerard Butler's films London Has Fallen and 300 and wrote: "Rishikesh is rising, London has not fallen.. 300 per cent a day well spent and most memorable in the resonance of the holy Ganges."

Rishikesh is rising , London has not fallen.. 300 percent ..a day well spent and most memorable in the resonance of the holy Ganges @gerardbutler

#Repost @avipeshwani Yoga Retreat on Ganges By Safarnama Great way to start 2020! A long conversation with Gerard Butler and Morgan Brown at Yoga Retreat by Safarnama. We talked about Varanasi, spirituality, Hinduism, Aghor Panth and importance of connecting with your true self. Glad to introduce him to Aghor Foundation and its work. #gerardbutler #sparta #varanasi #ghats #varanasighats #incredibleindia #safarnama #yogaretreat #hollywood #300 #india

Gerard Butler is best-known for his performances in films such as PS I Love You, Tomorrow Never Dies, 300, Law Abiding Citizen, Dracula 2000, Chasing Mavericks among many others. On the work front, Gerard Butler was last seen in the 2019 film Angel Has Fallen.