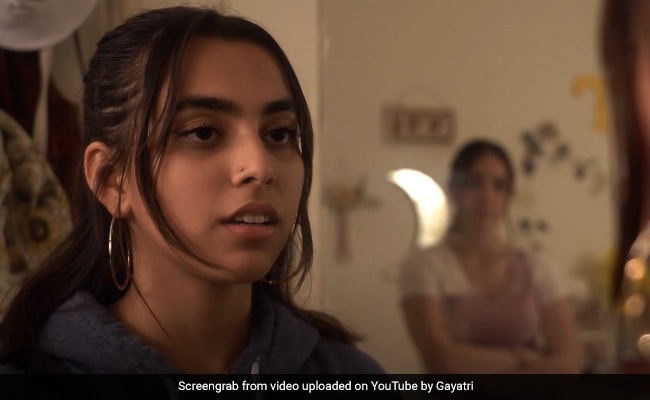 Did you know Anurag Kashyap's daughter Aaliyah and Imtiaz Ali's daughter Ida are friends? Aaliyah Kashyap recently featured in a short film directed by Ida Ali as part of her school course. Ida Ali studies filmmaking at California's Chapman University: Dodge College Of Film And Media Arts. She recently shared a short film she made for school on YouTube and talked about it in her Instagram stories. The three-and-a-half minute long short film is titled Gayatri stars Aaliyah Kashyap in the titular role. "Just a little short film my friends and I made for school," wrote Ida Ali on her Instagram stories, Giving a shout out to Aaliyah, Ida added: "See Aaliyah Kashyap, people are liking your acting."

Gayatri is about an introverted college girl, who has just moved to the US for higher studies and struggling to make friends. She would rather have a drink alone away, hiding in darkness, rather than hanging out with others at a party. The short film shows how Gayatri is not the only one who feels judged and left-out - so does the host of the party. And that's how Gayatri makes her first friend in college.

Aaliyah Kashyap studies in Los Angeles and is a lifestyle vlogger. Aaliyah is currently in Mumbai - she recently talked about finally being home after 10 months. Aaliyah is the daughter of filmmaker Anurag Kashyap and his former wife Aarti Bajaj. When in Mumbai, Aaliyah spends time with both her parents.