"S P Balasubrahmanyam Was Emotional About Me": Kamal Haasan On Their Deep Bond

S P Balasubrahmanyam: Speaking about why he considered the singer his brother, Kamal Haasan said, "It wasn't not just because he was someone who I regarded highly but because he had been with me during my high and my low" 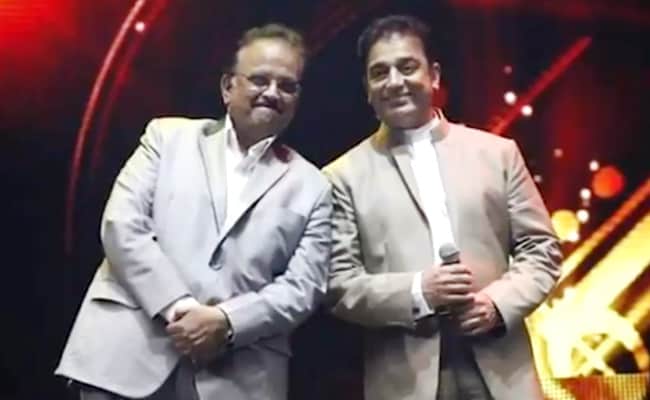 S P Balasubrahmanyam was like his older brother, actor Kamal Haasan said after the iconic singer's death on Friday. SPB, 74, died in the Chennai hospital he had been taken to after testing positive for COVID-19 on August 5. Despite testing negative for the virus earlier this month, Mr Balasubrahmanyam could not be taken off the ventilator and on Thursday was placed on maximum life support after his health worsened; Kamal Haasan visited the hospital on Thursday evening. Tributes from the film and music industry flooded social media after SPB's death; Kamal Haasan, one of the three actors most closely associated with Mr Balasubrahmanyam (the other two are Rajinikanth and Salman Khan), also addressed a virtual press conference.

Speaking about why he considered S P Balasubrahmanyam his brother, Kamal Haasan said, "It wasn't not just because he was someone who I regarded highly but because he had been with me during my high and my low. SPB was so emotional about me that even when you say nice things about me, he would start feeling emotional and that's one reason why, in case you want to make SPB cry, you just say nice things about me and you will see him wiping away his tears. I can actually take credit for him turning into an actor because that is the kind of relationship we had. I pulled him into acting and literally brought him in front of the camera as an actor."

Kamal Haasan explained how S P Balasubrahmanyam would "mould his voice" to suit not only a particular hero but also the character being played. When Mr Haasan, a man of different hats, sang, SPB was always encouraging. "You have done a good job. Let me just make a few corrections," he would say.

Kamal Haasan said that he looks at life and death as two chapters of the same book and that's why he thinks of SPB's death as an extension of life itself. SPB will continue to live in his thoughts and his mind, said the actor.

S P Balasubrahmanyam was like Kamal Haasan's public relations officer because he always talked up the actor at every chance. "Never thought would develop such a deep bond with SPB," said Mr Haasan. So intertwined were Kamal Haasan's face and SPB's voice that producers and the public always demanded that SPB sang for him in all films.

After S P Balasubrahmanyam's death, Kamal Haasan shared a chunk of memories in the form of a video. Some of the photographs were from the duo's early years in the industry, while some were relatively recent. Kamal Haasan paid tribute to S P Balasubrahmanyam with these words: "It's my good fortune that I was the shadow image of SPB's voice for a long time. His fame will live for 7 generations."

This is what Kamal Haasan posted:

Kamal Haasan and S P Balasubrahmanyam go back a long way. They worked together in several films. SPB was Kamal Haasan's voice in many tracks, some of which were Sorgham Madhuvile, Vaartha, Ore Jeevan, Orey Naal Unainaan, Aadungal, Manmatha Leelai, and Engeyum Eppodham among many others. A Kamal Haasan film - Ek Duuje Ke Liye - was also SPB's Hindi debut and won him a National Award. SPB also dubbed for Kamal Haasan in Telugu films, including Dasavathaaram in which he voiced all seven characters played by the actor.

Last year, to celebrate both Kamal Haasan's birthday and his 60 years in cinema, S P Balasubrahmanyam performed at a special concert titled 'Kamalum Naanum' (Kamal And I).

In August, Kamal Haasan had tweeted that for several years SPB had been his voice and he had been SPB's face.

S P Balasubrahmanyam, will be remembered for his extensive body of work, which includes over 40,000 songs in 16 languages. The legendary singer was the winner of six National Awards and he frequently collaborated with Ilaiyaraaja, AR Rahman and other music composers. He was also the recipient of the Padma Shri and the Padma Bhushan. He is survived by his wife Savitri, daughter Pallavi, and son S P B Charan, who is also a singer and a producer.