S P Balasubrahmanyam: "He will learn a song in 15 minutes, sing it in 10 minutes and go for the next recording. I don't think I've ever seen a singer like that," A R Rahman said 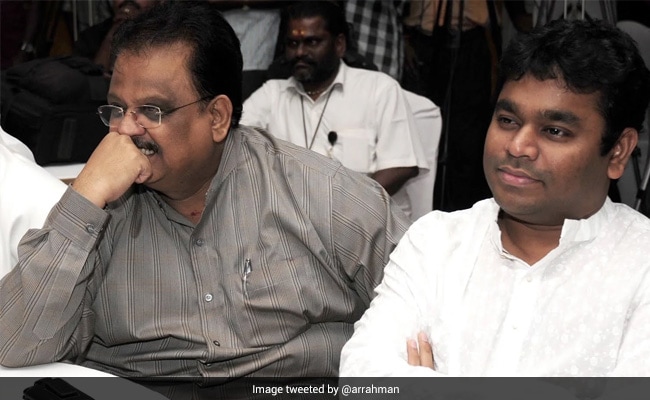 S P Balasubrahmanyam: A R Rahman in a throwback with SPB (courtesy arrahman)

A R Rahman, who made his debut as a music composer with 1992 movie Roja, has been paying tributes to iconic singer S P Balsubrahmanyam one post after the other. Rahman, who was one of the first ones to tweet "devastated" after the legendary singer's death, wrote: "Celebrating S P Balasubramanyam's music, life and personality" in another tweet. He shared a video, talking about the music legend as he knew him. Among the many interesting anecdotes Rahman shared about SPB, the music maestro also talked about his interacting with SPB during the recording of Roja soundtracks. "My other memories with him... when we recorded my first Roja recording Kadhal Rojave. He came into the studio and the first thing he said is 'How can this studio produce a cinematic song. So I smiled at him and he came back after the movie released and said: 'You've proved music can be produced anywhere. It's what you do with it'," Rahman said in the video.

1992 movie Roja marked A R Rahman's debut as a composer. It was the first of many SPB-Rahman projects together. When Rahman was starting out in 1992, S P Balasubrahmanyam was already a biggie in the music industry - he had won four of his six National Awards by then. SPB sang three songs in the Tamil soundtrack of Roja - Rukkumani Rukkumani, and the duet and solo versions of Kaadhal Rojave. In the Hindi soundtrack, he sang two duets - Yeh Haseen Waadiyan and a version of Roja Jaaneman (the second version was sung by Hariharan).

"He will learn a song in 15 minutes, sing it in 10 minutes and go for the next recording. I don't think I've ever seen a singer like that. So quick, so professional, so humble," A R Rahman added. Watch the entire video here:

Hours after SPB's death on Friday, A R Rahman paid a musical tribute to S P Balasubrahmanyam, describing him as "The voice of victory, love, devotion and joy." With the words, Rahman shared an obituary set to a song snippet. He followed it up with a throwback photo from a concert with SPB.

A R Rahman was one of the first ones to mourn SPB on Twitter. He could simply type out "devastated."

S P Balasubrahmanyam's funeral was held at his Red Hills farmhouse in Thiruvallur district of Tamil Nadu with police honours.