"I Found The Strangest Time To Get Married," Says Rana Daggubati After Getting Engaged To Miheeka Bajaj

"When I met her, that's the time I felt I am ready to do this," said Rana Daggubati 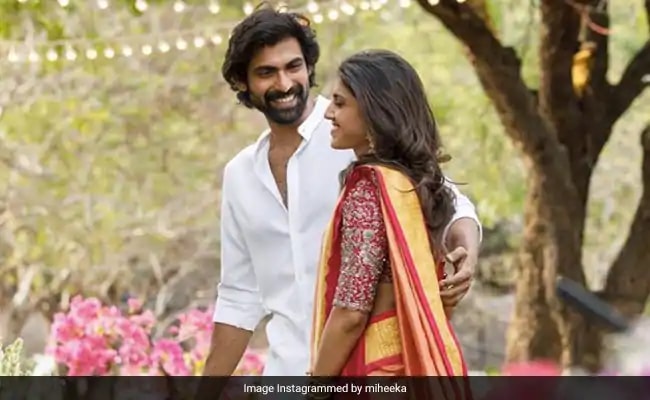 Rana Daggubati, who got engaged to his girlfriend Miheeka Bajaj on Thursday, in a recent interview with Indian Express was asked if he would be having a grand wedding, to which the actor replied, "Depends on the world's situation. I found the strangest time to get married." Speaking of how he proposed to Miheeka, Rana Daggubati said, "She knew where I'm getting at when I called her and then she met me in person, that's it. I remember I said a bunch of things together. For me, it was serious. It was commitment. When I met her, that's the time I felt I am ready to do this. It was that simple, for real."

Rana Daggubati and Miheeka Bajaj got engaged on Thursday. For their big day, Rana wore a white shirt and a matching veshti, while Miheeka complemented him in an orange saree. She accessorised her look with a statement necklace and bangles. Sharing the pictures from the engagement, Rana wrote: "And it's official" and added firework emojis.

Sharing the pictures from the engagement ceremony on social media, Miheeka wrote: "To the beginning of forever."

Earlier, Rana Daggubati's father Suresh Babu spilled the beans on the couple's wedding plans and told Times Of India that Rana and Miheeka will be having a December wedding. "We were thinking of having it around December but it could happen even sooner than that too. We will reveal the details once things are finalised," he said.