I am silently hoping for a miracle still: Samir Soni 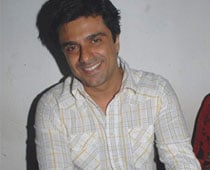 Mumbai: Samir Soni's eviction from Bigg Boss just before the finale this week, took viewers by surprise. Several expected him to be in the finals and emerge triumphant.

There has been outrage over his exit on several social networking sites even though the model-actor has yet to come to terms with his shock ouster ...

Q. Did you expect to get out?
No... not all. I was hoping to be in the finals and go through till the last.

Q.Do you think you will be recalled? Anything is possible on a reality show!
I am silently hoping for a miracle still!

Q.Who do you think will win?
I really can't say.

Q.If Bigg Boss had asked you?
Then I would have said Shweta.

Q.Who genuinely deserved to win?
Seemaji she surely did. If she and I were left, I would have had no regrets losing to her. Considering where she came from and where she has to go back to ¦ she deserved it.

Q.Did you have a word with the production team and channel about the captain's election?
Yes. There was no captain's election in the house when it was clear that I would be the one. And then I got evicted. I was told it was a creative decision.

Q.Were you the real Samir Soni on the show?
Yes... that's the way I am the way I was on the show. My parents were not keen that I go to Bigg Boss. They told me not to do anything that would embarrass them. I lived by the rules and my beliefs. All the values that I had learnt all these years came in handy. I don't care what people said about me, it just reflects on them. But I was there when it mattered to take on housemates and issues that needed to be resolved  when other housemates were in avoidance mode.

Q.How would you describe your stint in Bigg Boss?
Relaxed. I was away from the mobile phone and the daily hustle-bustle of life. In the house I was in a controlled environment. Imagine living in a world where there were only 14 people and every week, you had to throw one out. They were the only ones so you talked, fought, nominated and evicted too!

Q.Your exit was just in time for New Year's Eve.
By the time, I reached Mumbai it was 10 pm. I was too tired to get out and the traffic was bad, so Neelam had a few friends over.

Q.Is marriage with Neelam on the cards?
Soon, very soon.

Q.Your next step?
I hope my Bigg Boss outing translates into some good work. I have been in the industry for 10-12 years doing modelling, movies and theatre. Now I would love to turn anchor too host a show... a game show maybe. Something like 10 Ka Dum! I know I will do a good job.

Q.Ashmit, winner?
Speculation is rife that Ashmit Patel will win Bigg Boss 4. The finale of the show is slated for January 8. Sources say host Salman Khan, too, is keen that he emerge trumphant. Ashmit is extremely close to the Khans and is the rakhi brother of Alvira Agnihotri, Salman's sis. The final episode will have all the evicted housemates together again with their performances. Mallika Sherawat, Jaaved Jaafri and Terence Lewis, judges of Colors' forthcoming dance reality show Chak Dhoom Dhoom may also perform.

Q.In support of Samir: Shocking, unfair, rigged exit
There is outrage over Samir's exit which is a topic of discussion on several social networking sites and blogs. Here are some of the comments.

Amrish da Saint: Your eviction proved that good guys are not favourites but bad women are.

Sur Majumdar: We do not agree with this decision. We have opened one campaign also. Let's see what we can do for you.

Puja Jayaram: We are your fans and were watching the show just for you...very, very sad at your exit from the show. Do you think Bigg Boss votes are rigged because we all voted a loot for you

Samy: I was looking at you as a winner of the show. Very sad to see you out. I have stopped tuning into the show after your exit

Azam Khan: You are the best person among who ever entered the Big Boss show. You are a true winner.

Promoted
Listen to the latest songs, only on JioSaavn.com
Manmadh Raj: Your eviction is completely unethical. Now I am sure that it is scripted. I followed it regularly. If you see comments or voting on BB4 site or youtube, trend is clearly visible. It is Dolly who should have been out. I think Bigg Boss saved her for TRP.

Sadia Masood: I can't blieve that you are evicted. And that too in front of Dolly. I think it's cheating.