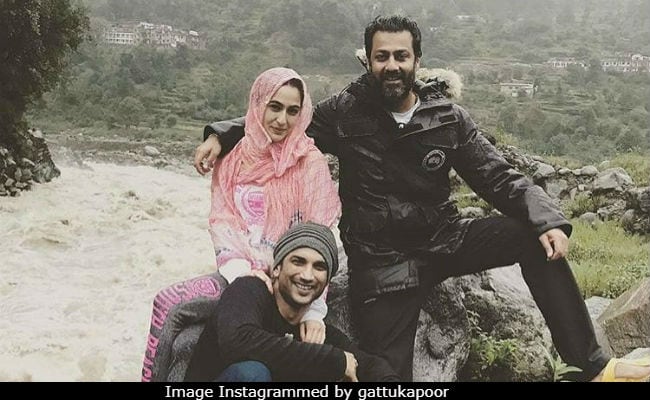 New Delhi: So, Sushant Singh Rajput is reportedly trying to convince director Abhishek Kapoor that Sara Ali Khan should get more screen time than is already assigned to her in Kedarnath, stated mid-day. Sushant has reportedly requested Mr Kapoor to ensure that Sara gets as much screen presence as he does in her debut film, added the mid-day report. "Sushant recently watched the rushes of Kedarnath and felt that both the lead actors should get equal prominence. He feels responsible for Sara since he is her first co-actor. He even had a chat with Abhishek, insisting that Sara get as much screen time as him. Sushant wants the movie to establish her as a solid performer," a source told mid-day. Sushant has wrapped his schedule for Kedarnath while Sara is still filming the remaining bits.

Sara Ali Khan trended a great deal after reports stated that she was reportedly sued by the makers of Kedarnath, for giving away her dates to Simmba when she was still under contract for Kedarnath. The producers of the film had reportedly filed a case against the actress and demanded a sum of Rs 5 crores as compensation. But speaking to mid-day, the source revealed that the matter has been resolved and that Sushant is now ensuring that the "bitterness" does not affect their new film. "After the legal matter regarding Sara's reassigning of dates was settled out of court, Sushant wanted to ensure that the bitterness doesn't spill into the professional space. As the film's leading man, he thought it necessary to have a conversation with Abhishek regarding giving extra mileage to Sara in the movie. Though Simmba will help her establish herself as a commercial actor, this movie will show her acting chops," the source told mid-day.

Promoted
Listen to the latest songs, only on JioSaavn.com
The filming of Kedarnath was stalled for weeks after Abhishek Kapoor's company and former co-producer KriArj Entertainment (owned by Prernaa Arora) got into a legal tussle regarding the film's funding. In April, a report stated that Ronnie Screwvala had taken over as the co-producer and it was later announced that Kedarnath will release in November, a month before Simmba, in which Sara co-stars with Ranveer Singh. Directed by Rohit Shetty, Simmba will mark Sara's second film and release in December.

Meanwhile, very little has been revealed about Kedarnath so far but the makers have been giving us glimpses of the movie from the sets without divulging much about the film. What we know so far is that Sushant has reportedly been cast as a tour guide in the movie while Sara plays the female lead in the love saga.