"It is said that love is meant to be a blessing on the world," wrote Karishma Boolani 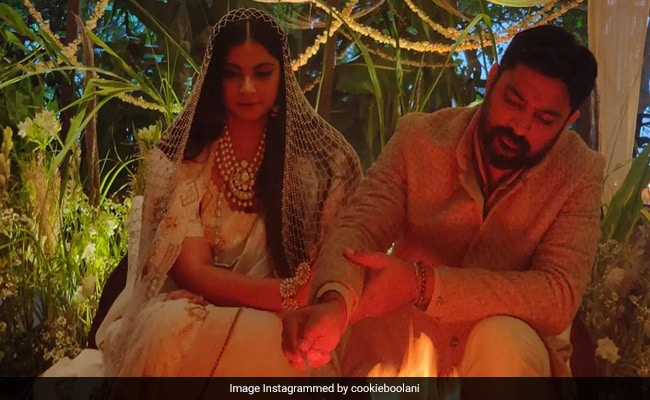 Film producer Rhea Kapoor married longtime boyfriend Karan Boolani on Saturday night in Mumbai in an intimate ceremony. The wedding took place at her father Anil Kapoor's bungalow in Juhu and was attended by family members and a few close friends. A few days later, her sister-in-law Karishma Boolani, who is a sports scientist and entrepreneur, welcomed Rhea to the Boolani family with a special post. She shared a picture of Rhea and Karan from the wedding festivities on her verified Instagram handle and she added an emotional caption to it. In the comments section, Rhea Kapoor wrote: "Love you Cooks" (Cookie Boolani is Karishma's Instagram moniker).

Karishma Boolani, in her note for the newlyweds, wrote: "It is said that love is meant to be a blessing on the world, because it is a context in which two people might become more than what they would have been alone. They become more, not just for each other, but for those around them too. The right kind of love between two people has the power to make the whole world a better place and that's what Karan Boolani and Rhea Kapoor have always been about. They are my heroes, my numero-unos, my greatest of all blessings."

Here's a picture from Rhea Kapoor and Karan Boolani's wedding:

Rhea Kapoor is the daughter of Bollywood veteran Anil Kapoor and jewelry designer Sunita Kapoor. Actors Sonam Kapoor and Harshvardhan Kapoor are Rhea's siblings. Apart from being a film producer, she is also a stylist (largely for her sister Sonam Kapoor). She has co-produced films such as Aisha, Khoobsurat and Veere Di Wedding, all three starring Sonam Kapoor. The sister-duo also runs an apparel brand called Rheson, which was launched in 2017.

Karan Boolani worked as an assistant director with Rhea Kapoor on the 2010 film Aisha, which starred Sonam Kapoor in the lead role. He has been photographed with the Kapoors on several occasions, including fam-jams and family functions.