How Radhika Madan Keeps Up With Her "Fur Ball's Energy"

Radhika Madan dropped a bunch of new pictures on Instagram 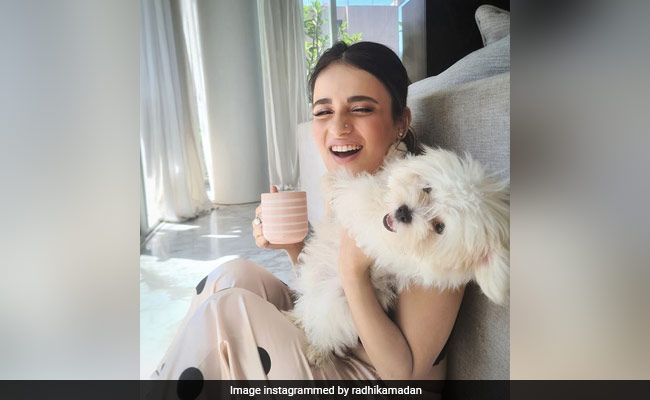 Actress Radhika Madan, on Tuesday, introduced her Instafam to her adorable fur ball. Not just that, Radhika also shared the "key to keep up" with the energy of her dog. Radhika Madan shared three pictures on Instagram. While the first one features her sitting a cosy corner of her house with a cup of coffee in her hand, the other two feature her pet pooch in her lap. Radhika looks as gorgeous as ever in a black crop top and an off-white PJ. Sharing the pictures on Instagram, Radhika revealed that "the key to keep up with this furball's energy is a lot of caffiene."

The actress post received scores of comments from her fans on social media. Among others, actress Sara Ali Khan commented on the post and complimented Radhika. "So pretty," she wrote and added a heart-eyed emoji to the comment. TV actress Kishwer Merchantt, on the other hand, heaped praises on Radhika Madan's performance in Netflix's show Feels Like Ishq. "Your so good in the 1st episode of #feelslikeishq," Kishwer Merchantt wrote in her comment.

Radhika Madan sure is a stunner and proof of that is her Instagram feed. The actress's feed is pretty interesting. She often shares some of the most stunning pictures of herself on the platform.

Radhika Madan began her acting career with the TV show Meri Aashiqui Tumse Hi. She made her Bollywood debut in 2018 with the film Patakha. She later worked with late actor Irrfan Khan in his last film Angrezi Medium. Radhika's new show Feels Like Ishq released on Netflix recently.