Priyanka Chopra, who is busy with Isn't It Romantic?, added that as per their work schedules, they couldn't have spent Valentine's Day together 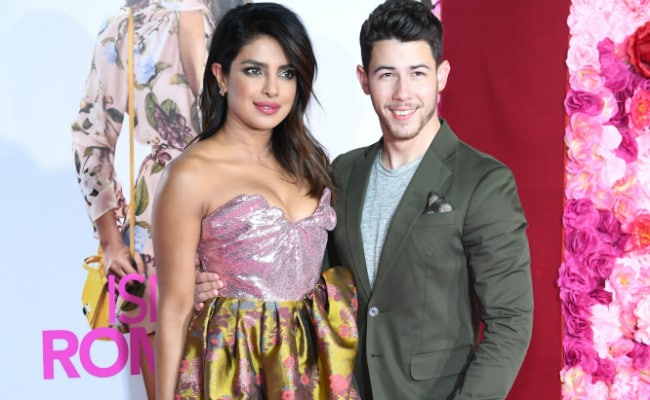 Amidst their super-packed schedules, Priyanka Chopra and Nick Jonas are looking forward to Valentine's Day celebrations this week. Priyanka will reportedly fly out of Los Angeles to join Nick in London, stated a report in Extra. "I'm going to be in London, because Nick is going to be working in London so I am going in for two days to hang out," Extra quoted Priyanka as saying. The actress was speaking at a promotional event for her upcoming film Isn't It Romantic?, when she told Extra: "I'm not a believer that you need a day to tell someone you love them, but it's always nice to hear it." The 36-year-old actress, who is busy with promotional duties of the film, added that as per their work schedules, they couldn't have spent the day together but they managed to squeeze in some time to be together.

Happiness and love all around. So proud of you @rebelwilson it's so amazing to see a woman in Hollywood literally make and star in a movie of her dreams. I wish you the best in your first production! You are such a delight and an inspiration to so many girls around the world! I wish #isntitromantic the best! @straussschulson you out did your self! @andybovine You made me laugh even on days nothing was funny...@liamhemsworth You are hysterical in the movie and were missed! But the beautiful @mileycyrus represented you really well...feel better! @brandontakespictures and @bettygilpin you made this so much fun!! The team at New Line and Warner brothers ...Gina, Gia, and Grant, and the crew...thank you for a great time! This is the date night movie you want to see with your loved ones! Get ready for love and laughter! #13thfeb @nickjonas I love you

"We didn't put too much pressure on it. We're not supposed to be together this Valentine's Day because I was working in LA and he in London, but things moved so I am glad we can spend that time together. The pressure does not exist. He's thoughtful and sweet all the time," Extra quoted Priyanka as saying. Priyanka and Nick had a destination wedding in Jodhpur in December and this will be their first Valentine's Day celebrations post wedding.

Happiness in the mountains

Earlier, in an interview with Vogue magazine, Priyanka Chopra shared the secret behind how they always slice out time for each other amidst their busy schedules. "We both are extremely working people. We both love our jobs extremely and are big workaholics but at the same time we know we need to prioritise each other. As you have seen we fly across the world even if it's for a day we just meet each other and do that while prioritising our works."