How Mahesh Babu And Daughter Sitara Spent A "Lazy Sunday" 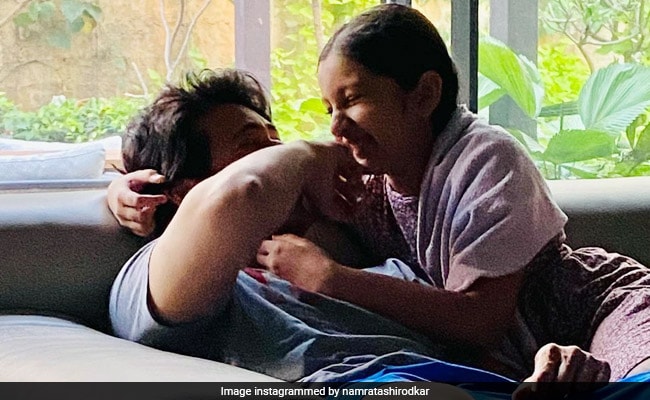 Namrata Shirodkar's Instagram timeline is a reflection of her happy family. The actress is married to Telugu superstar Mahesh Babu. The couple has two children - Gautam and Sitara. The entire clan keeps appearing on Namrata's feed from time-to-time. Recently, she shared an adorable picture of Mahesh Babu with Sitara. The father-daughter duo is seen cuddling and laughing in this 'Lazy Sunday' post. The caption says, "Lazy Sunday's by the pool almost over..." Not just the fans but Namrata's sister, actress Shilpa Shirodkar too dropped heart emojis in the comments.

Later in the day, Namrata Shirodkar dropped a snap of 'her side of the family.' Through her caption, the 49-year-old said that she was missing them. "That's how big my side of the family is and this is just half of them who descended on our home in Mumbai and we love them all as much clearly!! Posing for a family portrait means it's all good miss u all suddenly," the caption read.

Mahesh Babu recently wrapped up the Dubai schedule of his movie Sarkaru Vaari Paata. The Parasuram Petla directorial will see Keerthy Suresh as the female lead. Apart from this, Mahesh Babu also has SS Rajamouli's next in his kitty. The film will go on floors in 2022.

Mahesh Babu was last seen in Sarileru Neekevvaru, directed by Anil Ravipudi. Rashmika Mandanna, Vijayashanti were part of the film.