"Omg I can't take of my eyes such a cute baby," wrote Yuvika Chaudhary 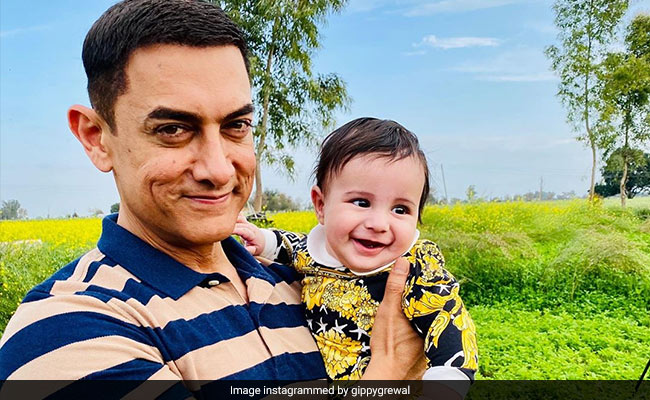 Aamir Khan, who is currently busy with the shooting of his forthcoming film Laal Singh Chaddha, scooped some time out his busy schedule and had some fun with singer Gippy Grewal's baby boy Gurbaaz Singh Grewal. On Friday, Gippy Grewal shared a set of super cute pictures of Aamir along with Gurbaaz on his Instagram profile and the photographs have our heart. In the pictures, an elated Aamir Khan can be seen holding baby Gurbaaz in his hands. The caption on Gippy Grewal's post, read, "Laal Singh Chadda. Gurbaaz Singh Grewal with Aamir Khan Bhaiji". He added the hashtag #respect to the post. Besides fans, Yuvika Chaudhary and Zareen Khan commented on Gippy Grewal's post. "Omg I can't take of my eyes such a cute baby," wrote Yuvika, while Zareen Khan commented: "Aww! I want to meet Gurbaaz Singh Grewal too."

The pictures are going insanely viral on social media. Check them out here:

Here are some posts from Aamir Khan's Laal Singh Chaddha diaries. During the Punjab schedule of the film, the 54-year-old actor also visited the Golden Temple.

Aamir Khan announced the project on his birthday in March, last year. The film Laal Singh Chaddha, is a remake of the 1994 film Forrest Gump, which featured Tom Hanks in the lead role. The film will be directed by Secret Superstar director Advait Chandan and it will be written by Atul Kulkarni. Laal Singh Chaddha will collaboratively be produced by Aamir Khan Productions and Viacom 18 Motion Pictures.

During an interview with news agency PTI, the Lagaan actor spoke about why he decide to make a remake of Forrest Gump and said,"I have always loved Forrest Gump as a script. It is a wonderful story about this character. It is a life affirming story. It is a feel good film. It is a film for the whole family."