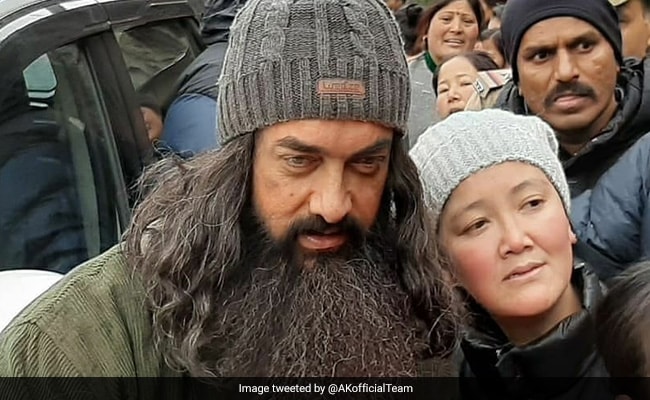 Aamir Khan might be a social media recluse but he always manages to book a spot on the list of trends and how. TBH, we are not surprised at all, keeping into consideration the actor's massive popularity. On Wednesday, the 54-year-old actor occupied a spot on the list of trends, courtesy a set of viral pictures, in which he looks almost unrecognisable as she sports long hair and beard. The aforementioned pictures happen to be from Himachal Pradesh, where the actor is currently shooting forLal Singh Chaddha. In the pictures which have been spreading like wildfire on social media. Aamir can be seen happily posing with the local people.

The pictures have been curated by several fan clubs dedicated to the actor on social media. Take a look at the pictures here:

Ahead of the Himachal Pradesh schedule, Aamir was spotted at Amritsar's Golden Temple, last year. ICYMI, this is the post we are talking about:

Aamir Khan announced the project on his birthday in March last year. Lal Singh Chaddha is a remake of the 1994 film Forrest Gump, which featured Tom Hanks in the lead role. The film will be directed by Secret Superstar director Advait Chandan and it will be written by Atul Kulkarni. Lal Singh Chaddha will collaboratively be produced by Aamir Khan Productions and Viacom 18 Motion Pictures and it will also feature Kareena Kapoor and Mona Singh.