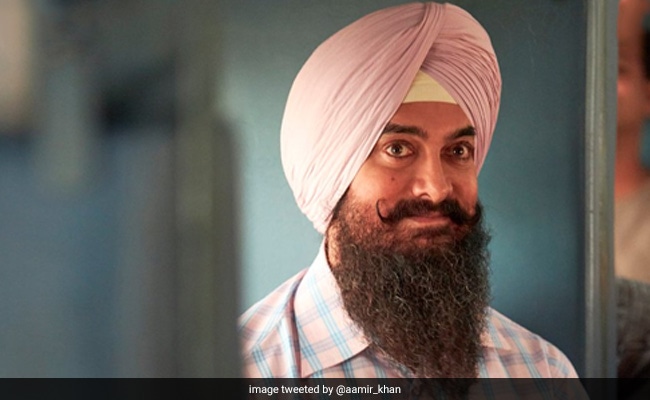 Aamir Khan unveiled his first look from his much-awaited film Laal Singh Chaddha on Monday and it will surely take away your Monday blues. The actor, who will play the main character Laal Singh Chaddha in the film, shared his character poster on social media in quite a style. In the poster, Aamir looks excited wearing a pink check shirt, grey trousers and a pink turban. He can be seen sitting on a train's berth holding a red box. It wouldn't be wrong to say that Aamir's new look - with moustache and long beard - has raised the excitement level among his fans. Sharing the poster, Aamir Khan introduced his character like this: "Sat Sri Akaal ji, myself Laal... Laal Singh Chaddha."

Laal Singh Chaddha is the Hindi remake of the 1994 Hollywood film Forrest Gump, which starred Tom Hanks in the lead role. The American comedy-drama is based on the 1986 novel of the same name by Winston Groom. The story revolves around the life of Forrest Gump - the titular character with a golden heart- who witnesses several historical events of the United States in the 20th century.

A few days ago, Aamir Khan shared an update about Laal Singh Chaddha - a video which features a white feather blowing in the wind. In the last part of the clip, the name and release date of the film flashes on the screen. "Kya pata hum mein hai kahani, ya hain kahaani mein hum," wrote Aamir Khan sharing the video.

Laal Singh Chaddha is Aamir Khan and Kareena Kapoor's third film together. The duo have previously worked in 3 Idiots and Talaash: The Answer Lies.

Directed by Advait Chandan and produced by Viacom18 Studios and Aamir Khan Productions, Laal Singh Chaddha will open in theatres on Christmas next year (December 25).