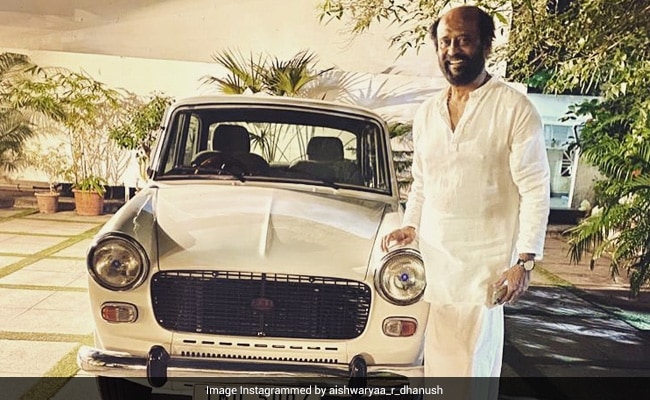 On Rajinikanth's 70th birthday, his daughter, director-singer Aishwarya posted an adorable wish for him on social media. Rajinikanth and his wife Latha have two daughters -Aishwarya and filmmaker Soundarya. On Saturday, Aishwarya posted a picture of the superstar wearing a kurta-dhoti and posing in front of what appears to an ambassador and wrote: "Rooted...Respect reaches you...Retro ... recent...Rocking effortlessly...Ready to roll ...RAJINIKANTH. Happy birthday, Appa. #mydaddystrongest." About Rajinikanth's political career, the actor made an announcement about his political party on December 3. The actor will launch his party in January next year. Check out Aishwarya's post for her father here:

Aishwarya is married to actor Dhanush. Last year, on Rajinikanth's birthday, she posted a picture of herself following Thalaiva and wrote: "Will follow forever ... just to see that smile.. happy birthday Appa!" The duo can be seen twinning in white outfits in the pictures.

Take a look what Soundarya and Dhanush had shared on Rajinikanth's 69th birthday:

Rajinikanth debuted in the film industry in 1975 with Apoorva Raagangal. He got his breakthrough with Moondru Mudichu, which also starred late actress Sridevi and Kamal Haasan. He has featured in more than 160 films, mostly Tamil movies. Some of Rajinikanth's films which released after 2010 are Enthiran (Robot in Hindi), Kochadaiiyaan, Lingaa, Kabali, Kaala, 2.0 and Petta. He was last seen in Darbar, which released earlier this year.

Rajinikanth has now a Siva film, titled Annaatthe, lined up.