The actress lost her father in 2017 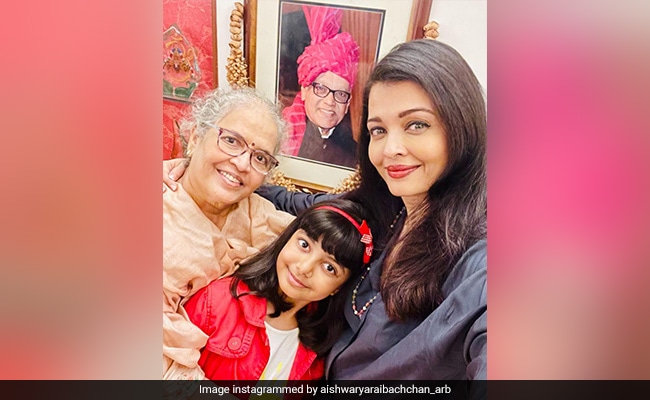 Tuesday was quite special for Aishwarya Rai Bachchan as it marked her parents Krishnaraj Rai and Vrinda Rai's 51st wedding anniversary. The actress lost her father in 2017. On her parents' wedding anniversary, Aishwarya Rai Bachchan shared a photo of herself, mother Vrinda Rai and daughter Aaradhya standing in front of a framed photo of Krishnaraj Rai. "Mine," she wrote with heart and star icons and added this wish on behalf of her daughter also: "Happy anniversary Mommy-Doddaa and Daddy-Ajjaa. Love you." Aishwarya can be seen wearing a black outfit in the photo while her mother can be seen sporting a peach outfit. Aaradhya looks cute in a white t-shirt, which she paired with a red jacket.

On her father's birth anniversary in November, Aishwarya Rai Bachchan remembered him with a heartfelt post. "Happy birthday, Daddy-Aijaa," she wrote and added, "Our ever smiling guardian angel. Love you eternally."

Last year, on her parents' anniversary, Aishwarya Rai Bachchan made a trip down memory lane and posted a throwback picture of her mother and father with this caption: "Love you eternally and beyond always. Happy 50th anniversary, my golden angels." Take a look:

In terms of work, Aishwarya Rai Bachchan was last seen in the 2018 musical film Fanney Khan, co-starring Anil Kapoor and Rajkummar Rao. Her next project is Anurag Kashyap's Gulab Jamun, in which she will co-star with her husband Abhishek Bachchan. Aishwarya is also part of Mani Ratnam's upcoming movie Ponniyin Selvan.