"How do you keep warm on Heropanti 2's freezing locations?" Tara Sutaria captioned her photo 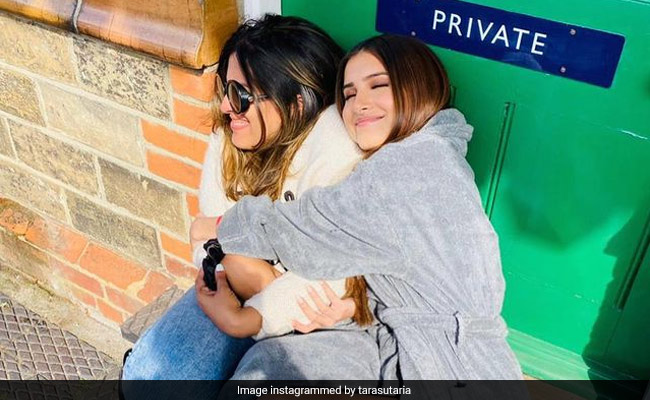 Tara Sutaria loves snuggles and cuddles, especially if you are in London when the weather is freezing. The 25-year-old actress is currently in London for the shooting schedule of the much talked about movie Heropanti 2. On Instagram, Tara Sutaria shared a behind-the-scenes photo from what appears to be the shoot location and shared a weather update of sorts. In the photo, she can be seen embraced in a tight hug with her friend Isha Goraksha, who also appears to be Tiger Shroff's manager. Tara Sutaria can be seen dressed in a bathrobe and slippers. "How do you keep warm on Heropanti 2's freezing locations? Why, you cuddle an Isha, of course!" Tara Sutaria captioned her photo.

Earlier in July, Tara Sutaria complained about having to wake up early for the shoot schedule of Heropanti 2 in an Instagram post. "5 am shoot daze," she wrote and shared a photo of herself wrapped in a blanket with her hair in rolls.

Tara Sutaria co-stars with Tiger Shroff in Heropanti 2. The first film in the series had released in 2014, which marked the Bollywood debuts of both Tiger and Kriti Sanon. Every now and then, Tiger Shroff also shares behind-the-scenes snippets from the film's shoot. Earlier this year, Tiger Shroff teased his onscreen character with this post - it was a schedule wrap.

Heropanti 2 is being directed by Ahmed Khan, and is expected to release sometime in December.