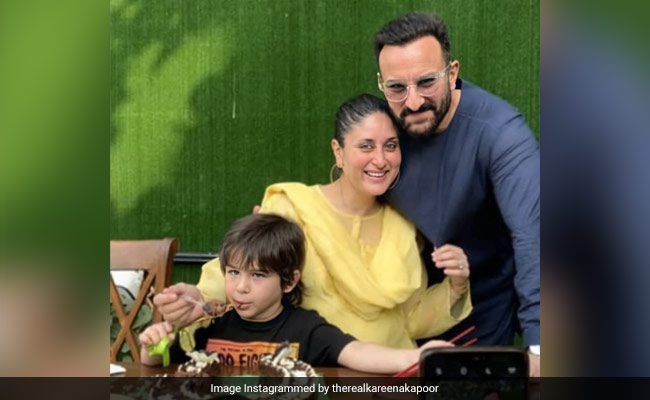 Unlike every year, Kareena Kapoor and Saif Ali Khan opted for low-key celebrations on their son Taimur's 4th birthday. The star couple invited only a few family members including Soha Ali Khan and her husband Kunal Kemmu and their daughter Inaaya. Taimur's aunt Karisma Kapoor, his grandparents Babita and Randhir Kapoor were also present at the get-together. Soha Ali Khan shared a picture from the fam-jam on her Instagram story. Meanwhile, Kareena Kapoor too shared a few pictures from Taimur's birthday festivities on Sunday. In the pictures, Kareena and Saif can be seen happily posing with Taimur as he cuts his birthday cake. The pictures were later shared by several fan pages dedicated to the actress on Instagram.

This is what Taimur's aunt Soha Ali Khan posted: The actress also posted a perfect birthday greeting for Taimur in the form of a video. "Chase your dreams and keep your chin up my boy but above all else... do everything in your life that makes you smile. No one can or ever will love you more than your Amma," read an excerpt from Kareena's post.

Kareena Kapoor and Saif Ali Khan, who are expecting their second child, announced their pregnancy in August this year. They got married in the year 2012. Saif's line-up of films includes Hunter, Bhoot Police, Adipurush and Bunty Aur Babli 2. He will also be seen in Amazon Prime Video's Tandav. Kareena Kapoor's upcoming projects are Laal Singh Chaddha, opposite Aamir Khan and Karan Johar's period drama Takht.