"Hrithik, being the sweet and caring person he is, noticed this, and gave me a book that changed my life," said Sameera Reddy 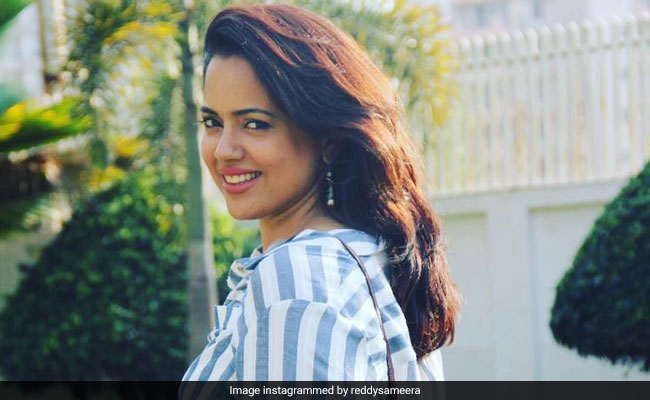 Sameera Reddy recently opened up about how she used to stammer during the initial days of her career and how Hrithik Roshan helped her overcome the problem, reports news agency IANS. Sameera revealed that Hrithik (who also overcame his stammering problem) gifted her a book that helped her overcome her fear. "Hrithik, being the sweet and caring person he is, noticed this, and gave me a book that changed my life. It helped me overcome my fear. Gradually, I started noticing changes in my speech," said Sameera. The De Dana Dan actress added, "I cannot thank Hrithik enough for that book and I still have it with me."

The 34-year-old actress revealed that she would "hestitate" to speak especially during auditions. "Due to my stammering problem, I would hesitate to speak in front of others, and (would hesitate) going for auditions thinking that people would judge me." IANS quoted Sameera as saying. She also revealed that she went to a speech therapist and started working on her speech.

Sameera Reddy recently welcomed her second child - a baby girl named Nyra. The actress had been actively sharing posts pertaining to motherhood on her Instagram profile. Sameera, who married Akshai Varde in a traditional Maharashtrian wedding in 2014, is also a mother to Hans Varde.

One month already is the second time round easier? absolutely not ! but soooo worth it ! #motherhood #newborn #herewegoagain

This little girl gave me the strength of wild horses. She wanted me to find myself again. She knew I was lost and she showed me the way. I found a voice in celebrating motherhood, wanting change on body perception and the best part was reaching out to people to just feel good about themselves . I'm so happy that people felt so connected and supported me to get here ! We prayed for a #babygirl and we are #blessed ! #baby #pink #itsagirl #motherhood #mom #sleeplessnights #herewegoagain

On the professional front, Sameera Reddy was last seen in the 2013 Kannada film Varadhanayaka. She has been a part of Bollywood films such as Taxi No 9211, De Dana Dan and Maine Dil Tujhko Diya among others.