Hema Malini Dances Dharmendra-Style And The Result Is...

In the video, Hema Malini is joined by actress Shilpa Shetty 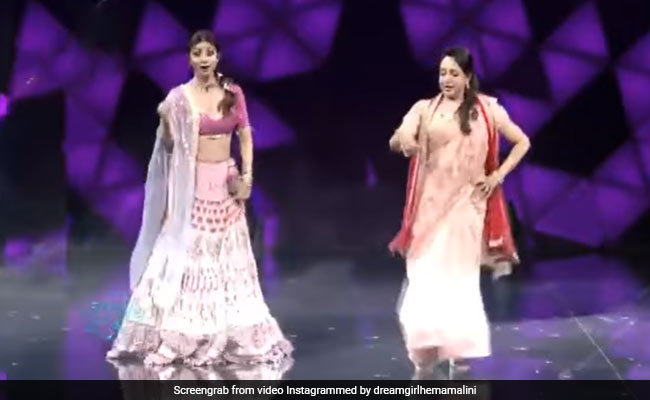 Hema Malini in a still from the video. (courtesy: hemamalini)

First, let us thank veteran actress Hema Malini for gifting us a treasured sight. What are we gushing about? It is a video shared by Bollywood's Dream Girl on Instagram. Why is it so special, you ask? Here, we see the actress dancing to a song, originally performed by her husband, actor Dharmendra. She sets the stage on fire by replicating Dharmendra's iconic steps from the track -  Jat Yamla Pagla Deewana. The song is from the 1975 film Pratiggya, which featured the star couple in crucial roles. It was sung by Mohammed Rafi. In the video, which is from a reality show, Hema Malini is joined by actress Shilpa Shetty. Well, the caption also needs your attention. Read it, "Dharam Ji ke steps karne ka maza hi kuch aur hai [There's a different kind of joy in performing Dharam Ji's steps] Enjoyed every moment of this performance with Shilpa Shetty." Hema Malini and Dharmendra's daughter, actress Esha Deol dropped various smileys and thumbs up emojis in the comments section. The clip is here.

As we breeze through Hema Malini's Instagram timeline, we often come across some throwback gems. Recently, she posted a photo from the muhurat ceremony of her 1970 film Johny Mera Naam. In the picture, we see her standing next to late actor Dev Anand. Here's her throwback frame. Take a look.

Social Media was on a collective meltdown when Hema Malini wished Dharmendra on his 85th birthday with a throwback picture. She wrote in the caption, "Today, we celebrate Dharamji's birthday. It is the love and affection of you fans who still watch and appreciate our movies that we remain fresh in your memories. This is what keeps us going and we need your blessings for this togetherness to last. Thank you for all the love." Here is the birthday post.