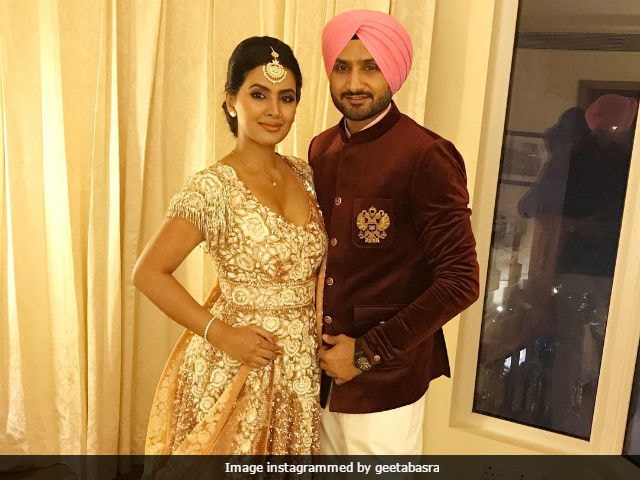 New Delhi: Cricketer Harbhajan Singh and his wife Geeta Basra are this week's celebrity guests on the dance reality show Nach Baliye 8. Actress Sonakshi Sinha welcomed the beautiful couple on the show. Harbhajan Singh and Geeta Basra not only indulged in some cricket with the judges and contestants on the show but also impressed everyone with their performance on the song Muskurane Ki Wajah from Hansal Mehta's film CityLights starring Rajkummar Rao. The 36-year-old cricketer also performed a clumsy pole dance to impress his wife Geeta Basra. Harbhajan Singh even grooved with stand-up comedian Bharti Singh on the song Kaala Chashma.

Geeta Basra also shared a promo video of the show and an adorable picture with Harbhajan Singh on social media.

Catch us tonight and tomorrow on Nach Baliye at 8pm on Star Plus ! Don't miss the fun ! @harbhajan3

#Repost @starplus with @repostapp It's selfie time on #NachBaliye8.

On April 19, the official page of Nach Baliye 8 shared an adorable picture of Harbhajan Singh and Geeta Basra with their daughter, Hinaya. See the pic below:

Harbhajan Singh got married to Geeta Basra on October 29, 2015 in Jalandhar, Punjab. They were blessed with a daughter on July 27 last year.

Last night, Siddharth and Trupti Jadhav's performance touched everyone's heart. The couple, who performed on the song Jo Tu Mera Humdard Hai from Ek Villain, received a standing ovation from all. Post their performance, an emotional Harbhajan Singh apologized to Geeta Basra for unintentionally hurting her in the past.

Promoted
Listen to the latest songs, only on JioSaavn.com
Sonakshi Sinha, chorographer Terence Lewis and filmmaker Mohit Suri are judging the eight season of Nach Baliye. The show is being hosted by Karan Tacker and Upasana Singh.