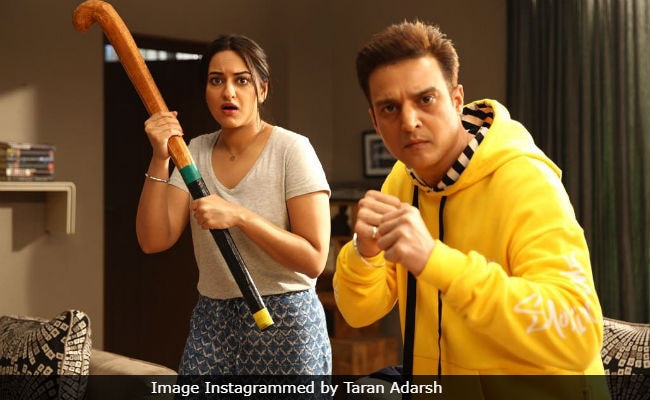 Sonakshi Sinha's film Happy Phirr Bhag Jayegi had a not so happy start at the box office as it managed to collect only Rs 2.70 crore on its opening day, reports trade analyst Taran Adarsh. According to Taran Adarsh, the film performed better in North India. He also mentioned that the film needs to perform better over the weekend in order to ensure stronger numbers in the following week. Taran Adarsh tweeted: "Needs to witness substantial growth over the weekend plus maintain a strong trend on weekdays to leave a mark." In his tweet, Taran Adarsh also mentioned that the first installment of the Happy Bhag Jayegicollected over Rs 2.32 crore on the day of its release. Happy Phirr Bhag Jayegi released along with Utkarsh Sharma's Genius on Friday.

#HappyPhirrBhagJayegi has a slow start on Day 1... Fared better in North... Needs to witness substantial growth over the weekend + maintain a strong trend on weekdays to leave a mark... Fri 2.70 cr. India biz... First part had collected 2.32 cr on Day 1.

Happy Phirr Bhag Jayegiopened to poor reviews. In his review for NDTV, film critic Saibal Chatterjee gave the film one-and-a-half stars out of five. He wrote: "The primary problem with Happy Phirr Bhaag Jayegi isn't that it is pure drivel. That is something that could be pardoned in Bollywood laugh riot. But here, the hilarity quotient is low. The precursor had delivered on at least a part of the promise inherent in the quirky premise. This one goes through the motions without ever coming close to finding a genuine rhythm."

Happy Phirr Bhag Jayegiis the sequel to the 2017 film Happy Bhag Jayegi. Except Abhay Deol, the entire cast of the film has been retained. Sonakshi Sinha, Jassie Gill and Piyush Mishra are the newest addition to the film. The film also features Jimmy Sheirgill, Ali Fazal and Diana Penty. The film has been directed by Mudassar Aziz.