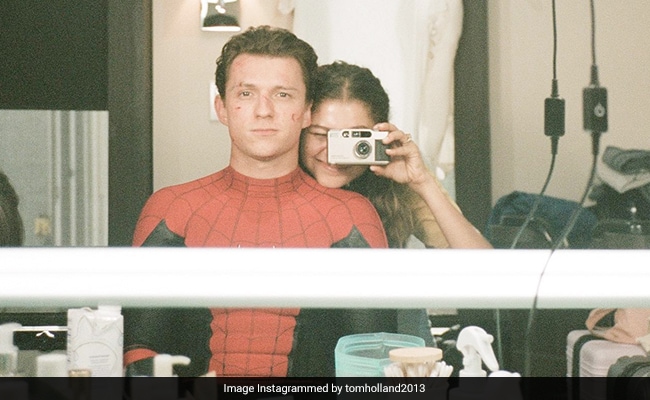 Everyone's favourite Tom Holland turns a year older today. The British actor is known for his inspired performances in films such as How I Live Now, In the Heart of the Sea and The Devil All the Time. His work has brought the young star several accolades such as the British Academy Film Award, Saturn Awards, and even a Guinness World Record. The actor is perhaps most well-known for playing the titular role in Marvel's Spider-Man: Homecoming, making Tom Holland the youngest actor to play the superhero. He reprised the role in the sequels Far From Home and No Way Home.

If there is one thing, however, that is more talked about than Tom Holland's acting skills, it is his chemistry with his girlfriend and co-star Zendaya. The couple's warm bond and friendship has left fans always asking for more. With Tom and Zendaya often rooting for each other on social media, we have been presented with several adorable couple goal moments.

On Tom Holland's birthday, we look at some of the cutest moments of Zendaya and Tom.

We have to start with this adorable image that Tom Holland shared on Zendaya's birthday last year. Sharing an image clicked in the green room on the sets of one of the Spiderman films, Tom wrote, “My MJ, have the happiest of birthdays. Gimme a call when your up.”

During the premiere of Dune, one of Zendaya's biggest films, Tom Holland was the doting boyfriend as he shared a black and white image of the actress from the red carpet. In the caption, he wrote, “Dune,” with heart-eye emoji. Zendaya replied with a puppy-eye emoji.

On the occasion of Tom Holland's birthday a few years ago, Zendaya shared a goofy picture of herself along with Tom, actors Darnell Appling and Jacob Batalon. Wishing him a happy birthday, she said, “Thanks for being the wonderful person you are, we're all very lucky to have you and your weirdness.”

Thanks to the couple's numerous fan pages, there is so ample evidence on the internet of Tom and Zendaya being a much-in-love couple. Take, for instance, this image of the actors walking hand-in-hand on the streets of Boston.

A post shared by Tom Holland and Zendaya ???????? (@tomhollandandzendaya)

Tom Holland is boyfriend goals for a reason. The actor won hearts on the Internet when he proudly celebrated just how amazing his girlfriend Zendaya looked at the 2018 Met Gala. Sharing a photo, he wrote, “All hail the queen. Killing it mate”.

The Hollywood stars make for an adorable couple, don't they? Tell us your favourite Tom Holland and Zendaya moment.