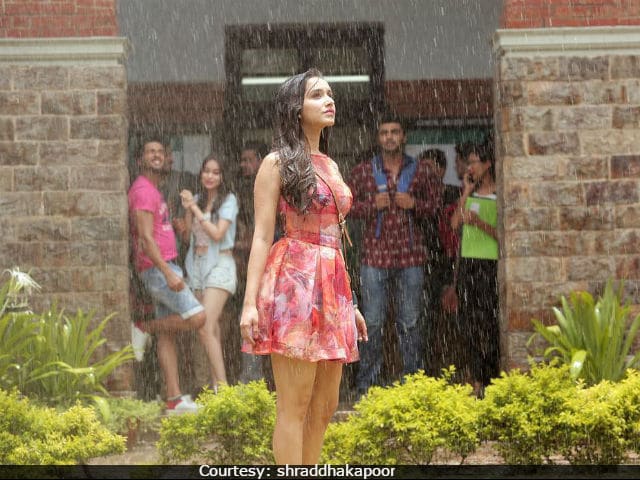 Shraddha Kapoor in a still from Half Girlfriend Song Baarish (Courtesy: shraddhakapoor)

New Delhi: The first song of Shraddha and Arjun Kapoor's upcoming film Half Girlfriend was unveiled today. Titled Baarish, the song beautifully captures Arjun's love for Shraddha, which she is not aware of. Arjun plays Madhav Jha, a Bihari student, who comes to Delhi for higher studies and Shraddha is seen as Riya Somani, a rich Delhi girl and Arjun's college mate. Both of them are basketball players and in the song, we see Madhav's attempts to impress Riya through the game. Baarish has been sung by Ash King and Shashaa Tirupati. The lyrics courtesy goes to Arafat Mehmood & Tanishk Bagchi. Half Girlfriend is an adaptation of Chetan Bhagat's novel of the same name.

Some songs wanna make u fall in love presenting #Baarish#HalfGirlfriendhttps://t.co/nw87YLFR2l

The trailer of the film was unveiled on Monday, where we came to know that Madhav (Arjun) hearts Riya (Shraddha). Madhav wants Riya to be his girlfriend, but she apparently wants to be his 'Half Girlfriend.' (Quite surprising). Twitter too found Shraddha's answer peculiar and many 'Half' jokes and memes went viral.

Watch the trailer of Half Girlfriend here:


The Mohit Suri-directed film went on floors in March last year. Shraddha and Arjun have been collaborated for the first time. Half Girlfriend has been shot extensively in New York City, Cape Town and Delhi.

Promoted
Listen to the latest songs, only on JioSaavn.com
The film is scheduled to release on May 19.

After Half Girlfriend, Arjun Kapoor will be seen in Mubarakan while Shraddha Kapoor is prepping for Haseena: The Queen Of Mumbai.