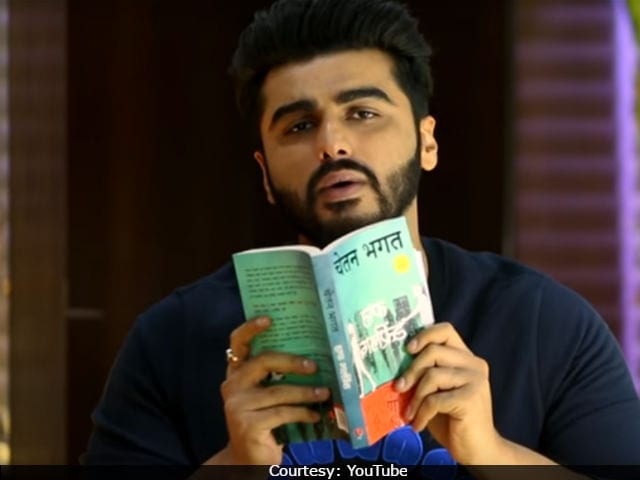 New Delhi: Actor Arjun Kapoor, who stars in Mohit Suri's upcoming film, Half Girlfriend, today introduced us to his character Madhav Jha on social media. Arjun aka Madhav Jha plays the role of a college student from Bihar, who comes to Delhi for higher studies. In the teaser, Madhav is seen reading excerpts from the book Half Girlfriend, where he talks about Riya Somani, played by Shraddha Kapoor. Once he is done reading, he asks, "Par ek baat batao, ye Half Girlfriend hota kya hai?" The film is an adaptation of Chetan Bhagat's novel of the same name. Ahead of the film's shoot, Arjun reportedly went to Bihar to prep for his role.

Watch the teaser of Arjun and Shraddha's Half Girlfriend here:


Two posters of the film have already been unveiled. The trailer of the film will release on April 10.

A relationship status you will not deny, #HalfGirlfriend. 2nd poster out now! @ShraddhaKapoor@mohit11481@chetan_bhagatpic.twitter.com/Mex1q0d6Y7

Here's the motion poster of Half Girlfriend featuring Shraddha and Arjun. The actors have replicated the novel's cover for the poster.


Half Girlfriend will see Shraddha and Arjun paired up for the first time on screen. The film tracks Madhav and Riya's close friendship. Both of them play basketball enthusiasts in the film.

The Mohit Suri-directed film went on floors in March last year. It has been shot extensively in New York City, Cape Town, and Delhi. Shradhha and Arjun constantly kept us updated with the shooting schedule of the film.

Promoted
Listen to the latest songs, only on JioSaavn.com
The film is scheduled to release on May 19.