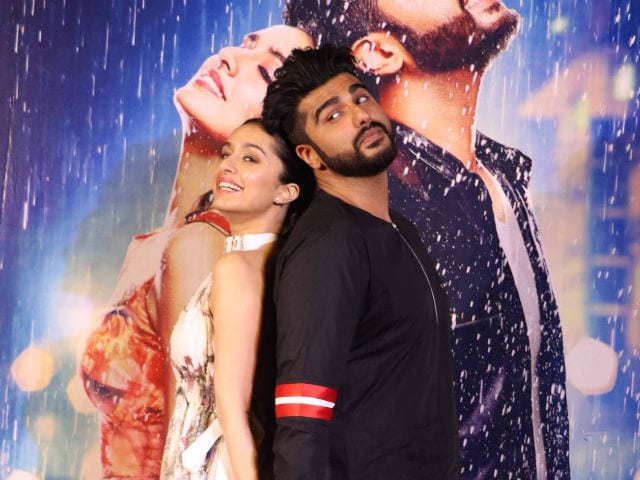 Arjun Kapoor and Shraddha Kapoor recreate the poster of Half Girlfriend

New Delhi: Actor Arjun Kapoor, who is currently busy promoting Half Girlfriend, shared a new motion poster of the film on social media. The poster unveiled by the 31-year-old actor hints that there are 'chances of rain' tomorrow as the makers of the film are set to release the first song, titled Baarish. Arjun Kapoor captioned the poster as: "Kal 'BAARISH' hone waali hai... Our 1st song... Out tomorrow #BAARISH #HalfGirlfriend #19thMay(sic)."Half Girlfriend, directed by Mohit Suri, is based on Chetan Bhagat's novel of the same name. The film, which is scheduled to release on May 19, features Arjun Kapoor and Shraddha Kapoor in lead roles. Check out the poster shared by Arjun Kapoor below:

The first trailer of Half Girlfriend was released by its makers on Monday. The trailer shows how Riya Somani, portrayed by Shraddha Kapoor, does not wish to commit to Madhav Jha, played by Arjun Kapoor, but agrees to be his 'half girlfriend.'

Watch the trailer of Half Girlfriend below:


Half Girlfriend marks Shraddha Kapoor's third collaboration with filmmaker Mohit Suri. They have previously worked together in films such as - Aashiqui 2 and Ek Villain.

Promoted
Listen to the latest songs, only on JioSaavn.com
Shraddha Kapoor was last seen in Shaad Ali's Ok Jaanu opposite Aditya Roy Kapur. After Half Girlfriend, the 30-year-old actress will be seen in Haseena: The Queen of Mumbai, directed by Apoorva Lakhia. The film is based on Mumbai underworld don Dawood Ibrahim's sister, Haseena Parkar.

Arjun Kapoor finished shooting for Anees Bazmee's Mubarakan on Sunday. The film, which also stars Anil Kapoor, Ileana D'Cruz and Athiya Shetty in lead roles, is scheduled to release in theatres on July 28.