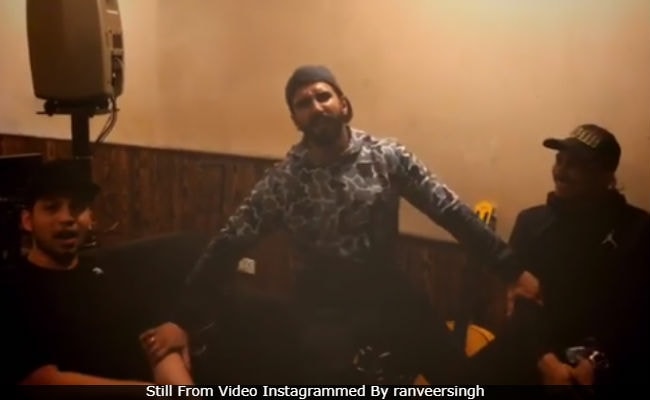 Ranveer Singh, we love you for several reasons and one among them is obviously your social media activities and posts. On Thursday, the 33-year-old actor, who is awaiting the release of Gully Boy, shared a video of himself recreating the famous song Mere Do Anmol Ratan from the film Ram Lakhan and introduced rappers Divine and Naved as his 'do Anmol Ratan'. Ranveer, you are so hilarious! In the video, Ranveer is lip-syncing the song and Divine and Naved also sing with him. "Mere do Anmol Ratan," Ranveer captioned his video, which appears to be taken at a dubbing studio. The post got over 4 lakh views within minutes of posting it.

Here's the video we are talking about.

Ranveer Singh's Gully Boy, also starring Alia Bhatt, is inspired by the struggles and work of Divine and Naved (Naezy). The duo are closely associated with the film.

After posting the video, Ranveer shared a picture with Divine and Naved. "Wolfpack," he wrote.

Ranveer plays the role of a street rapper, who later becomes a sensation in the world of hip hop while Alia stars as his love interest.

Of Gully Boy's plot, director Zoya Akhtar told news agency PTI, "It is not a biopic on Divine and Naezy. It is a fictional story. It is inspired by them and their music. They worked with us on the script to make it authentic. There are lot of things from their life but it is not a biopic."

Kalki Koechlin is also a part of Gully Boy, which releases on February 14.