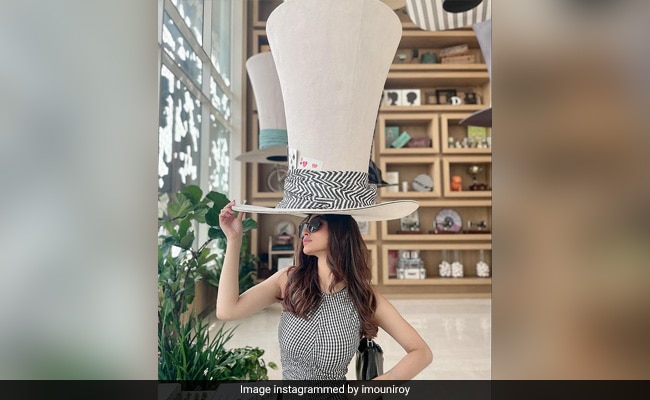 That Mouni Roy is a multifaceted individual is not news anymore. From acting to dancing, the diva has showcased her very best in every project she undertakes. Now, the Made In China actress has brightened up our lazy Sunday with a quirky picture of herself posted on her Instagram timeline. In the picture, Mouni is wearing a pretty black and white dress along with oversized shades. However, the accessory that makes this picture quirky is a hat and trust us when we tell you it is no ordinary hat. Yes, Mouni is seen posing along with a giant hat with cards tucked into the large black and white scarf draped around the hat.

If the visual immediately reminds you of a character from the classic Alice In Wonderland, you are quite right. Mouni is channelling her inner Mad Hatter as she playfully poses in the picture. In the caption posted along with the picture, she wrote, “Mind your head,” adding a popular quote by the character from the story. “You're entirely Bonkers, but I'll tell you a secret, all the best people are - Mad Hatter,” she quoted.

Given how much Mouni loves her books, we are not surprised that she has pulled off this literature-inspired look with panache. As expected, the picture received several likes and comments from fans and followers within minutes of being posted.

Previously, the actress had shared her love for reading by posing with a book that she called her "portable magic". Lounging on a bed looking like a diva, she wrote, "Not without my portable magic."

If there is something Mouni loves as much as reading it is spending time with her friends. The actress was recently spotted at the birthday party of her close friend and colleague Aamna Sharif. She posted fun Instagram Reels of herself along with the birthday girl, looking ultra-glamorous.

Mouni also wrote a sweet birthday note in the caption for Aamna that read, “Another year & you are gorgeous as ever. May your life be a joyous journey of art, role play, carb fests, travels, music fests with the friends and family always around you, that every day gives you a reason to celebrate, with perfect mornings & even better days. Lots of love today & always. HAPPY BIRTHDAY.” She also posted several heart emojis and a cake and balloon emoji.

Mouni will be next seen in the Ranbir Kapoor and Alia Bhatt film Brahmastra. The film is being directed by Ayan Mukerji. It also features Nagarjuna and Amitabh Bachchan in pivotal roles. Before making her Bollywood debut in the Akshay Kumar film Gold, she was a household name thanks to her television shows Mahadev and Naagin.