Grammys 2020: AR Rahman also remembered Kobe Bryant with a glimpse of the tribute speeches from the Grammys. 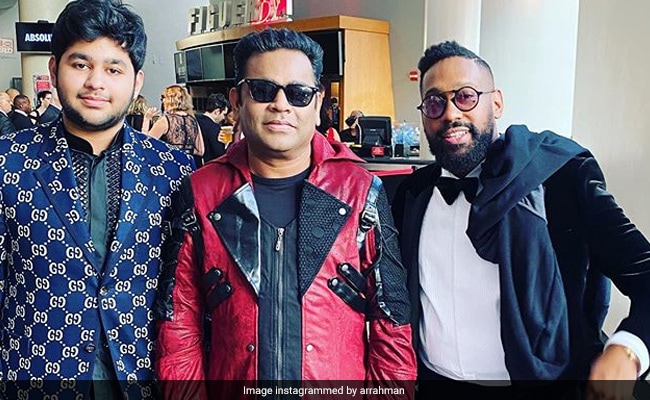 AR Rahman is at the Grammys this year as well! The Grammy-winning singer-composer checked into Los Angeles' Staples Center for the 62nd edition of music's biggest awards and as is ritual, shared some of his favourite moments from the evening on Instagram. Accompanying AR Rahman to the Grammys was his son Ameen, who also featured in a one of his entries. And guess who the father-son duo bumped into when at the Grammys? Singer-songwriter PJ Morton, who is also part of pop band Maroon 5. AR Rahman had to had to get a photo with PJ Morton, who won a gramophone trophy for Best R&B Song for Say So at the Grammys.

Meanwhile, tributes poured in for NBA legend Kobe Bryant at the Grammys, who died in a helicopter crash just hours before the awards began. AR Rahman also remembered Kobe Bryant with a glimpse of the tribute speeches from the Grammys.

Last year, AR Rahman went to the Grammys with his daughter Raheema:

AR Rahman won two Grammy Awards in 2010 - Best Compilation Soundtrack for a Motion Picture (for Slumdog Millionaire) and Best Motion Picture Song (for Jai Ho). AR Rahman's Grammy wins were two more trophies added to his awards legacy, headlined by the Oscars - he won two Oscars for Slumdog Millionaire in 2009. AR Rahman's legacy of awards includes six National Awards and several Filmfare Awards from across Bollywood and the South film industry. He was honoured with the Padma Shri in 2000 and Padma Bhushan in 2010 for his contribution to Indian music and cinema.