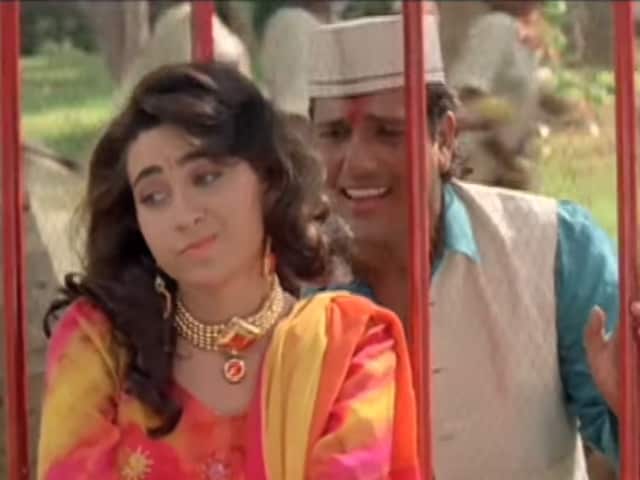 Karisma Kapoor and Govinda in a still from Hero No 1.

New Delhi: In the Nineties, back when Karisma Kapoor still spelt her name Karishma, Govinda was the brightest star in the Bollywood firmament. Much of the mass appeal he commanded as the 'Virar ka chhokra' or aam aadmi made good depended on his very particular dancing style and his ability to make the moves - none of which required the sort of finesse or gymnastic skill that Hrithik Roshan and Shahid Kapoor display today - look masterful rather than cheesy and utterly ridiculous.

He danced the way they probably would on the streets of Virar at Dahi Handi time but he did so with a charm and fluid grace that was uniquely his. Just as Michael Jackson imitators are pale copies of the original thing, nobody has been able to inspire the same level of admiration by copying Govinda's routines.

Several of his most popular numbers featured actress Karishma Kapoor, his co-star in hit films like Hero No 1, Raja Babu and Saajan Chale Sasural, many directed by David Dhawan. Govinda will reunite with his former co-star, now missing the H in her first name, to dance on the finale episode of talent show Dance India Dance - Super Moms. (Also Read: "Dancing With Karisma Brought Back Memories," Says Govinda)

Govinda, now 51, has declared himself thrilled. He hasn't apparently spoken to David Dhawan in five years but feelings towards his former heroine are warm. "It is a pleasure to share the stage with Karisma as she is one of those actors who can take any song to the next level with her electrifying performance and sheer passion for dance," he told news agency IANS.

"It was a nostalgic moment when we danced again together after a long time. The roaring applause we received on the sets reminded me of the kind of love and adulation we enjoyed when these songs had released," Govinda added.

A sample of 'these songs' are included here. These are five of our favourites: